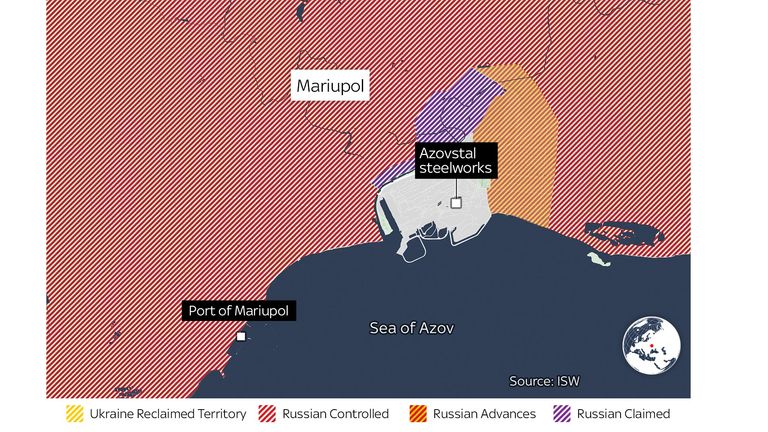 Russian forces have begun storming a steel plant where Mariupol’s last pocket of resistance has been holed up as it hopes to defend the besieged city.

Denys Prokopenko, commander of the Ukrainian Azov regiment, has said “heavy, bloody battles” are underway at the sprawling site which has a network of underground tunnels.

“The situation is extremely difficult, but in spite of everything, we continue to carry out the order to hold the defence,” he added.

His wife, Kateryna Prokopenko, said: “We don’t want them to die. They won’t surrender. They are waiting for the bravest countries to evacuate them.”

It comes after the Red Cross said more than 300 civilians were evacuated from Mariupol and other nearby communities on Wednesday.

This includes “several dozen civilians” who left the besieged steel plant and reached Zaporizhzhia during a five-day safe passage operation, the charity said in a statement.

Over the weekend, more than 100 people – including women, the elderly and 17 children – were evacuated from the steelworks during a ceasefire in an operation overseen by the UN and the Red Cross.

But the attacks on the plant soon resumed.

It is unclear how many Ukrainian fighters are inside, but Russia has said there are around 2,000 with 500 reported to be wounded.

Ukraine has said a few hundred civilians remain inside the plant.

One woman said the assault on the Azovstal steelworks began “as soon as we were brought out” of the site.

Another spoke of the “animal fear” she felt when the building she was in was hit by a bomb.

Other key developments
• Oil prices jumped following the proposed EU ban on Russian oil imports
• US President Biden said he would speak with leaders from the G7 advanced economies this week about more sanctions on Russia
• The United States has provided intelligence that has helped Ukrainian forces kill about 12 Russian generals, the New York Times reports
• The armed forces of Ukraine’s neighbour Belarus began sudden large-scale drills to test their combat readiness.

A Russian official has denied Moscow’s troops are storming the plant, but Mr Prokopenko said Russian soldiers had pushed into the mill’s territory.

Russian state TV has shown smoking rising over the plant which has been subjected to massive aerial bombardments and shelling from Vladimir Putin’s forces in recent weeks.

The steelworks has come to represent the last pocket of Ukrainian resistance in the besieged port city which has witnessed some of the worst atrocities of the war.

The Russian government said on the Telegram messaging app that it would open another evacuation corridor from the plant between 8am and 6pm local time on Thursday through Saturday.

But there was no immediate confirmation of those arrangements from other parties, and many previous such assurances from the Kremlin have fallen through, with the Ukrainians blaming continued fighting by the Russians.

It comes as Moscow’s forces have bombarded rail stations and other supply-line targets across Ukraine to disrupt the delivery of western weapons, Russian Defence Ministry spokesman Igor Konashenkov said.

Air raid sirens sounded in cities across the country on Wednesday night, and attacks were reported near the capital Kyiv, in Cherkasy and Dnipro in central Ukraine, and in Zaporizhzhia in the southeast.

In Dnipro, authorities said a rail facility was hit. Videos on social media suggested a bridge there was attacked.

There was no immediate word on casualties or the extent of the damage.

Responding to the strikes in his nightly video address, Ukrainian President Volodymyr Zelenskyy said: “All of these crimes will be answered, legally and quite practically – on the battlefield.”

A senior US defence official, speaking on condition of anonymity, has said that while the Russians have tried to hit critical infrastructure around the western city of Lviv, specifically targeting railroads, there has been “no appreciable impact” on Ukraine’s effort to resupply its forces.

Lviv, close to the Polish border, has been a major gateway for NATO-supplied weapons.

Weaponry pouring into Ukraine helped its forces thwart Russia’s initial drive to seize Kyiv and seems certain to play a central role in the growing battle for the Donbas, the eastern industrial region that Moscow now says is its main objective.

Ukraine has urged the West to ramp up the supply of weapons ahead of that potentially decisive clash.

Meanwhile, the UK’s Ministry of Defence has said Belarusian forces have begun military exercises which will seek to hold Ukrainian forces back from fighting to protect the Donbas region.

The ministry said in an update: “Russia will likely seek to inflate the threat posed to Ukraine by these exercises in order to fix Ukrainian forces in the North, preventing them from being committed to the battle for Donbas.”