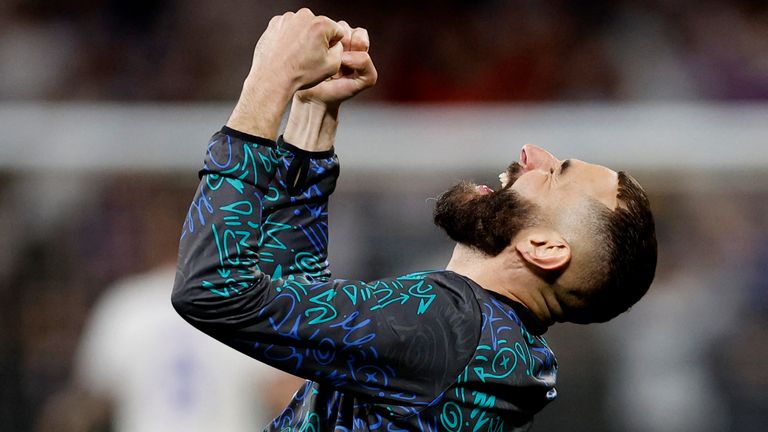 Manchester City have been knocked out of the Champions League by Real Madrid after conceding two goals in the dying seconds of the game.

Pep Guardiola’s side looked comfortable after a Riyad Mahrez goal put the visitors 1-0 up in the second leg of their semi-final and 5-3 up on aggregate.

But in the last seconds of normal time, Brazilian Rodrygo set up a grandstand finish cutting the aggregate deficit to 5-4.

More drama was to follow in the Bernabeu as Rodrygo headed another in stoppage time to level the tie at 5-5.

And in the opening minutes of the first half of extra time, Karim Benzema completed the incredible comeback scoring a penalty to lead the match 3-1 and 6-5 on aggregate.

The result comes after Real staged rousing comebacks against Paris St Germain and Chelsea in the previous two rounds.

The 13-time winners will now face Liverpool in the final at the Stade de France in Paris on 28 May.

After the nail-biter of a semi-final, Real’s head coach Carlo Ancelotti was asked if there was ever a moment he thought they had lost?

With Man City, Guardiola has won the Premier League, the League Cup, and the FA Community Shield, but the Champions League has alluded him.

After the 120 minutes of Wednesday’s clash, the manager said: “We were close, but football is unpredictable – sometimes we must accept it.”

He told BT Sport: “From a City point of view, I’m gutted, but the experience this club has – not this group of players – this club as a whole has in this competition and the belief they have is remarkable.”

Ancelotti will now be the first manager in history to take a team to the Champions League final for a fifth time.

Originally scheduled to take place at the Krestovsky Stadium (Gazprom Arena) in Saint Petersburg, Russia, the final’s venue was changed in February due to Russia’s invasion of Ukraine.

This will be the third time the Stade de France has been the host, following the 2000 and 2006 events.