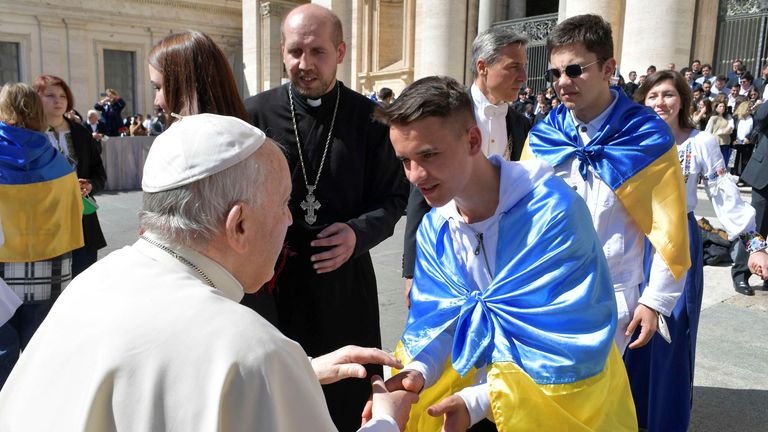 Pope Francis has encouraged Catholics to be kind to their mother-in law, who is often the victim of “cliches”.

The Pope, 85, spoke to his general audience about the relationship between generations. He said that while he didn’t see her as the devil or anything, he did say that she was always portrayed in a negative light. The mother-in-law of your husband is also your mother.

He encouraged daughter-in law to care for their relationship with their mother in-laws.

He said to the crowds at St Peter’s Square, Vatican, Wednesday: “They gave birth for your spouse.” “Always make them happy.”

He also gave advice to mothers-in law: “Be careful about how you express yourself.”

He has spoken on the topic before. Pope Francis made a funny comment during a 2015 visit to the USA. He said: “Families quarrel, sometimes plates can fly, children bring headaches, but I won’t talk about mother-in laws.

After a flare up of knee pain, he cancelled all activities and held his general audience at Vatican.

While holding onto the arm of his aide, the pontiff moved slowly and with a noticeable limp.

“I am sorry, but I will be greeting you while I’m seated,” he said. He said that the healing process of his knee seemed to be ongoing and that he couldn’t stand for prolonged periods of time.

In recent months, he has had to stop engaging in activities because of persistent pain in his right knee. Sciatica is a condition that causes pain in the legs.

During his address, he also asked for prayers to end the war in Ukraine. He condemned every time Russia invaded.

He said, “May all weapons cease to exist so that all who are able to stop war can hear the cry for peace from all humanity.”