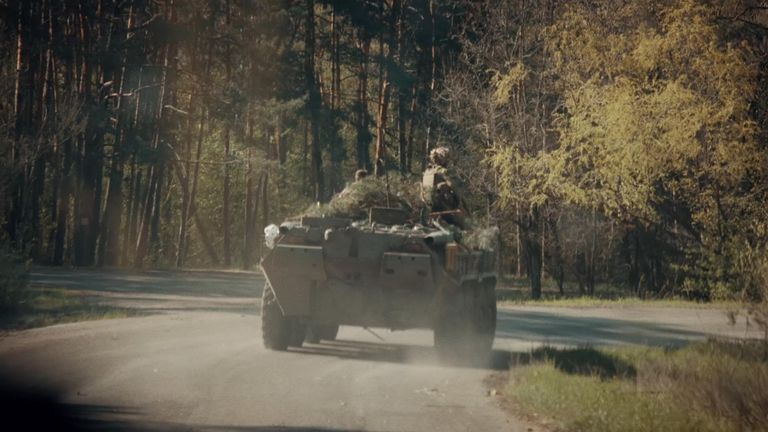 The fight for what should be a time of hope and renewal has not slowed down as winter has become spring.

Ukrainian forces race through forests that shimmer in the late April sun to fortify Donbas.

Each day brings more violence as Russian artillery strikes the villages along the frontline with indiscriminate fire. The fires that have been started by the shelling are visible as black smoke rising to the horizon.

After winding our way through the eerie desert roads for a while, we finally reach Oleksandrivka. Russian forces are approximately 2km away.

As we approach the village, we see that it is almost deserted.


A few soldiers were packing up their belongings when we met them.

The Russian forces are trying to advance, so they’ve been working for the past few days in this area.

One of the men is willing to show us a farm just hit. We can hear the rolling thundering of shelling far away.

He tells us to cover ourselves with trees, as we follow his lead.

He says that drones are above and that standing in the open could result in your death.

He takes us to the location. He warns us that it is too dangerous to continue.

Although the family who lived here managed to escape, it was soon under attack again. We are now running for cover.

This conflict has resulted in the displacement or capture of millions of Ukrainians.

Frontlines are changing all the time, and many villages such as this one are in the firing line now that Russian forces are moving forward.

This war is both unpredictable and brutal.

He didn’t want his name to be revealed. The soldier said that they have had to force people to leave their homes, their homes, and their possessions in certain cases.

We meet a group medical personnel nearby. They are taking a break from the frontline.

It’s an opportunity to rest and share food in the woods.

Ariets, a military medic, said that it was difficult every day to treat his comrades. However, he believes Vladimir Putin’s forces are possible to defeat.

He stated, “We are on land. There is no way back, but most Russian soldiers don’t know what they’re doing here. Even if they had brains, they’d understand that they’re murderers and occupiers.

The war is entering its third month.

As Ukraine strengthens its East-based army with new soldiers and weapons, it knows that the next few weeks are crucial.