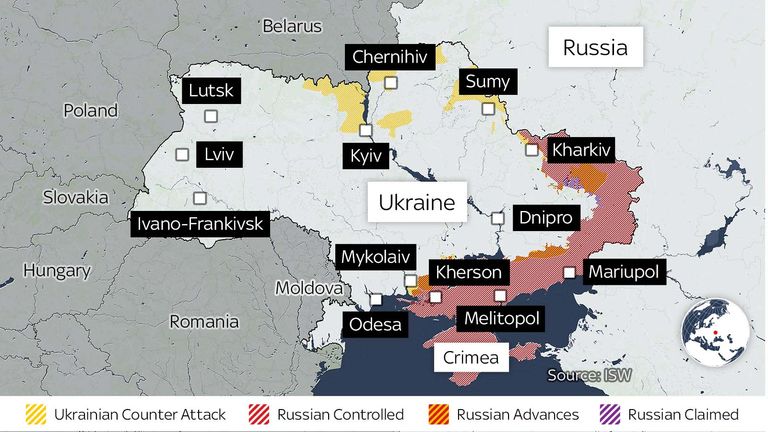 Kharkiv has a rhythm to its life, but it’s a terrible rhythm of war and sirens.

Every day is the same, with explosions and billowing smoke, and fear of what lies ahead.

A strike is witnessed in a light industrial area near the city of Kiev. Five attacks were reported in just one day.

Each slowly erodes the fabric of a community and demoralizes the people.

Kharkiv’s firemen are fighting bravely to save their city, but they are losing.

They race to extinguish the source, causing irreparable damage to lives as well as livelihoods.


They treat victims of these attacks at the local hospital in the corridors. This is partly because they are busy, but also because they want them to stay away from windows in case they are hit.

Although the patients won’t give their names to us, some of them will agree to speak with us. A missile struck a Kharkiv marketplace, causing one man’s shoulder to be broken.

When asked if there was a message he could send to the attackers, he replied: “I’m kind of man, but I don’t want those who did this to me live.”

Another man, a council worker, who helped people board up their windows in wrecked homes or businesses, was shelled three more times.

He escaped twice without injury, but he showed us the place where the shrapnel he encountered in his third encounter went through a bone in his leg and narrowly missed an artery.

Continue reading: The shadows are for those who have stayed in Kharkiv.

We return to the Ukrainian Orthodox Church, which has so far been unscathed to meet Father Victor Marynchak.

He was sending troops off to unknown fates in February, the last time we saw him. We were told he would be there for his people and he has kept his word.

He is still comforting, reassuring, and encouraging them two months after their battle against the invaders.

As he delivers morning mass, there are both territorial defense volunteers and well-equipped troops who make the sign of the Cross.

Father Victor believes that two-thirds have fled his congregation – but he gives his blessing to them as long as they return after the war is over. He says here in Kharkiv that “there are not absolutely safe places.”

We asked him about his reaction to the attacks on Saltivka.

“We visit hospitals, we see the suffering, and we bury our soldiers. We see terrified children and helpless seniors. It breaks my heart.”

He is calm and thoughtful, and he knows how to answer questions. He has little to no contempt for Vladimir Putin, hidden beneath all his calm and prayers.

He described the Russian president as “Satan in human form” when he was asked how he felt towards him.

Father Victor makes a vow before we leave that he will only leave the church if he is seriously injured or dies.

Despite the destruction in Kharkiv there is still defiance that the Ukrainians won’t lose this war. They also have their spoils.

We witness a captured Russian tank being loaded onto a trailer from a nearby village. The last remnants of the Russian flag that was hanging from the turret are ripped.

Military personnel spray black paint on the sides of vehicles to cover the famous ‘Z’ logo.

It is one thing to remove the symbols of enemy, but it is quite another to rid the country of them.