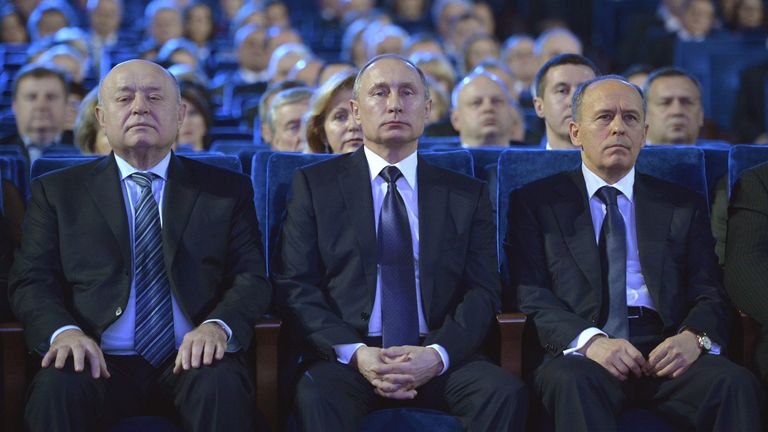 So who’s close to Vladimir Putin?

Let’s start with the Siloviki – the security men around Vladimir Putin, most of whom rose up through the ranks of the KGB as he did and have a hawkish, Cold War mindset.

They believe themselves in an existential battle with the West where the ultimate goal of the US vis-a-vis Russia is regime change.

This is why their pitch on Ukraine is that this “special military operation” is justified in defence of Russia and the Russian people.

They consider Ukraine a US proxy and see Russia’s invasion as a necessary step in preventing the US from destroying the Russian state.

In the last few years, their influence has grown as Putin has shifted his focus from economic and social issues towards perceived security-related threats, including the crushing of civil society and internal dissent.

Perhaps the most powerful of them all is Nikolai Patrushev, head of Russia’s Security Council.

He told Russia’s Kommersant newspaper in 2015 that “the US would prefer Russia not to exist at all as a country”.

Read more: Who are the oligarchs with Kremlin ties targeted in UK’s new sanctions against Russia?

Last January, in reference to jailed opposition leader Alexei Navalny he claimed that “the West needs this figure to destabilise the situation in Russia, for social upheaval, strikes and new Maidans” – a reference to the 2013 uprising in Kyiv’s central square.

He is also reportedly the Kremlin’s informal delegate for the Balkans and is thought to have played a key role in orchestrating the coup in Montenegro in 2016, a bid to stop the country from joining NATO.

Alexander Bortnikov is the current director of the FSB, Russia’s domestic intelligence agency and successor to the Soviet spy agency, the KGB.

As the head of perhaps the most important locus of power in the country, Bortnikov maintains an iron grip on Russian life and has been responsible for the tens of thousands of detentions and the dramatic tightening of restrictions on civil society which has gathered pace over the past year, particularly since the imprisonment of Alexei Navalny.

Though responsible mostly for domestic affairs, Bortnikov may also fuel anti-Western sentiment around the president.

“We can imagine that he delivers to Putin on an everyday basis reports about hostile American influence or Western influence inside of Russia, and how Western secret services are trying to undermine political stability,” says Tatiana Stanovaya, a security expert and founder of political think-tank R.Politik. ‘

“And he believes it.”

Sergei Naryshkin is the head of the SVR, Russia’s Foreign Intelligence Agency.

To a certain extent, the SVR plays second fiddle to the all-powerful FSB which also tramples on foreign turf.

Naryshkin met Putin during their spy training days and was deployed to Brussels as a diplomat at the same time as Putin was sent as a young spy to Dresden.

However, if the latest televised meeting of Russia’s Security Council is anything to go by, he may well be on the way out.

Naryshkin was publicly humiliated by the Russian president, stumbling to find the right words to give his support to independence for the separatist republics in Eastern Ukraine.

Sergei Shoigu is Russia’s defence minister and a close associate of Putin.

They go on widely publicised hunting and shooting expeditions to Siberia together.

Shoigu is not a military man by training but since his appointment to the Defence Ministry in 2012 he has overseen Russia’s 2014 annexation of Crimea and its intervention in Syria.

“He’s a strong defender of the national interest but he doesn’t have the same visceral anti-Western feelings as the rest,” says Mark Galeotti of Mayak intelligence, an expert on Russia’s security agencies.

Army General Valery Gerasimov is chief of the general staff.

He is an old-school Soviet general and experienced military strategist.

The Ukrainian invasion plan will have been Gerasimov’s remit and any perceived failings will land at his door.

If the US is the enemy, the worst-case scenario of NATO troops and strategic weapons hypothetically positioned in Ukraine was perhaps the working strategy he will have been tasked to work on.

“This worst-case scenario, which is natural for security and strategic planning, becomes your main and basically only scenario: They’re coming to get us,” says security analyst Vasily Kashin.

“You just need to prevent it.”

Anton Vaino is chief of staff of the Presidential Executive Office and will therefore spend a substantial amount of time with the Russian president.

Less so post-COVID, due to Putin’s paranoia around catching the virus which may too have led to his being increasingly isolated even from key advisors.

Vaino was sanctioned alongside Shoigu by the EU in their first round of sanctions following Russia’s invasion of Ukraine.

Sergei Lavrov has been the foreign minister since 2004.

A seasoned diplomat, he is known as a wily, tough operator and has been the face of Russia’s diplomatic efforts throughout the Ukraine crisis.

Prominent as he is internationally, he is more of a messenger than a key influencer over the Russian president.

There are also constantly circulating rumours, tricky to confirm, that he has been looking to retire for years.

Not to be overlooked, the unofficial close confidantes who are friends with Putin.

Yuri Kovalchuk is a Russian oligarch with family and personal ties to the president.

They met when Putin was deputy mayor of what was then Leningrad, modern-day St Petersburg.

“He has never held any government position, but he’s obviously one of the most influential personalities in Russia and he is ideologically very close to Putin,” says Mikhail Zygar, author of All the Kremlin’s Men.

“He’s one of those who helped him create that universe of an imaginary empire that Russia needs to strike back against.”

The buck stops with Putin

We won’t know whose counsel played a key role in the invasion we’re seeing in Ukraine.

The buck stops with Putin and it’s not clear who he consulted. 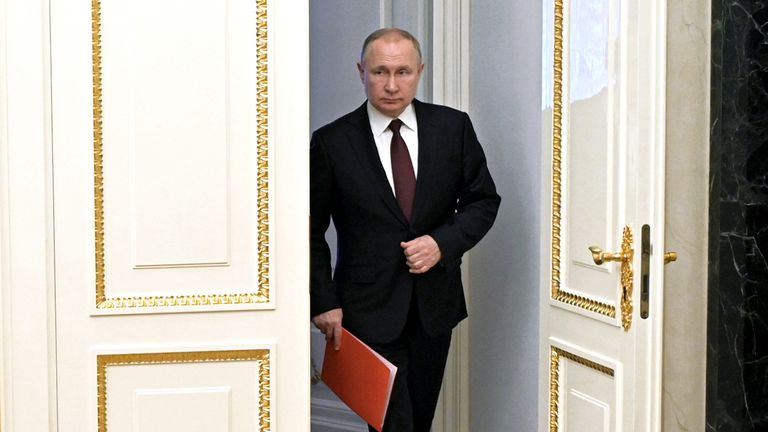 Ukraine invasion: What are Russia’s objectives?

There may be many within his administration who never expected things to go this far.

Given the interconnected nature of the Russian elites though, bound together by financial and family ties – marriages, mistresses and money – it may be unlikely we’ll see elite defections.

But it would appear that the instinct Putin seems to be acting on comes from a broader shared mentality among the elites, passed on to large swathes of the Russian people through vigorous propaganda.

That Russia is engaged in an existential battle with the United States and that survival justifies any action even if that includes regime change and the bombing of civilians in Ukrainian cities – though that part hasn’t yet been passed on through state TV.

“It’s not a worldview of a small and isolated group of the people”, Kashin says.

“It’s a worldview which is shared by a significant part of the Russian bureaucracy and security establishment.”

There are many in Russia who believe their future has been ripped from them by Putin’s war in Ukraine and by the sanctions which will set their country back decades, economically and socially.

They feel the shame of what their leader is doing in their name.

They go out on the streets chanting ‘No to war’.

They know that sanctions will rid their children of the futures they hoped they’d have.

The problem with sanctions

But for many in the elites, the sanctions will help.

Russia will no longer have to care what the West thinks.

It will develop its own industrial segments, which will provide money flows to those who can capture them.

Increasingly isolated from the globalised West, Russians more broadly will become less aware of what they’re missing out on and more convinced the West is out to get them.

That makes them easier to manage.

“I don’t think that the political elite around Putin would suffer, it’s actually in their interest,” he says sadly.

“The more sanctions, the more stable the regime.”