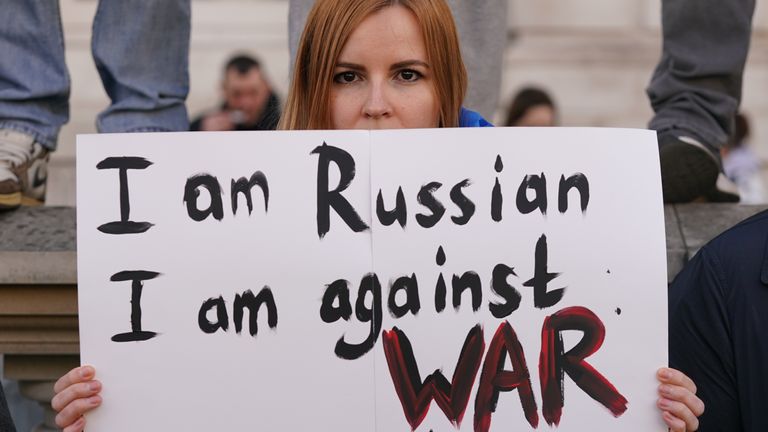 Tearful protesters branded Vladimir Putin a “barbarian” and “an animal” as they gathered in London to express their anger at the invasion of Ukraine.

Hundreds gathered both outside Moscow’s embassy in Kensington and in Downing Street, calling for the Russian leader to withdraw his forces.

Similar rallies have taken place elsewhere in the UK and in Ireland, including in Edinburgh, Manchester and Dublin, as well as across the globe.

Dozens of people were wearing Ukrainian flags tied around their necks and holding flowers.

Helena Kovalenko, 33, originally from northern Ukraine, said: “I’m so angry with Putin for invading my Ukraine.

“I have family there, my mum and dad, and I’m so scared for them.”

Ms Kovalenko, who has lived in the UK for nine years, added: “I’m here today to call for this country to help.

Another protester originally from Ukraine, named Andriy, 27, said he had joined the protest to call for other countries to “do more”.

He said: “The world can’t watch as my people suffer – Putin is a barbarian, he’s an animal.

“If sanctions don’t stop him, the UK, the US and Europe must be prepared to do everything.”

Some in the crowd, which blocked a path outside the embassy, held posters comparing the Russian leader to Hitler.

Others had tears in their eyes, while others were visibly angry as dozens of police officers watched on.

One man who had been chanting and moving among the crowd was stopped briefly by police.

Another protester said he was there to “stand in solidarity” with Ukraine.

A banner, held above the crowd, had “stop bombing my family” written on it.

Prayers in Ukrainian and English were led by a priest.

Earlier this week, more than 1,700 anti-war protesters were arrested across 54 cities in Russia – as scores of demonstrators voice their fury over their president’s invasion.