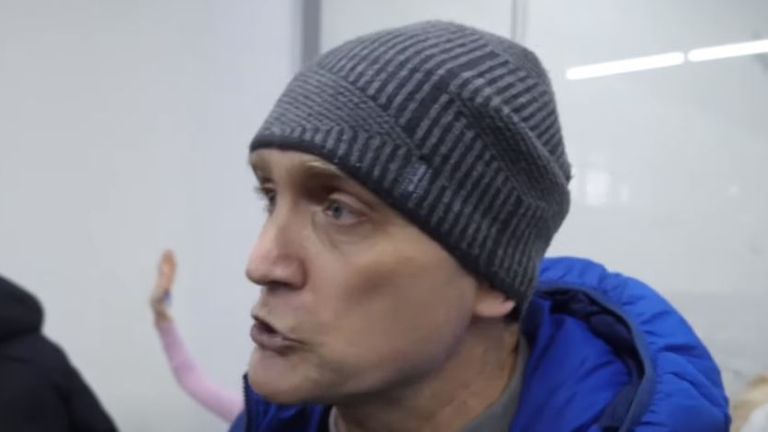 Within the confines of a local community centre, we watched thousands of people from Dnipro rally to the cause. They had come in their hundreds to defend their city, and everyone had a contribution to make.

A queue of budding army recruits stretched out the front door, like a spontaneous army forming in the middle of the city.

They carried their identification documents and some had brought pack sacks, but many had little or no military experience.

I spoke to one middle-aged man in a blue parka and asked him why he wanted to sign up. His name was Igor Vyazovoy.

“I have a good job. I make aluminium windows, aluminium constructions for big buildings, but now I have to fight.”

“Maybe I had some doubts before,” he said, “but now I am definitely ready, this is war.”

Nearby, dressed in a pink winter jacket and matching woolly hat, was a softly-spoken bank manager called Katezyna Kozii.

She told me that she had two daughters, aged 11 and four, but it had not stopped her from volunteering.

“Are you prepared to use a weapon?” I asked.

“I think so – but I have only shot at a shooting range,” she admitted. “Actually, I don’t have much experience, but I am a quick learner.”

“We are already hurt, we are already suffering, I am tired of being afraid,” she said. “That is why I want to do something.”

I asked Katezyna if she had been inspired by the conduct of the country’s inexperienced leader, Volodymyr Zelensky.

The former actor and comedian won the presidency in 2019 after starring in Servant Of The People, a satirical TV show about a high-school-teacher thrust into the top job.

In recent months, he has used his acumen for social media to rally support, broadcasting appeals for unity and attacking fake news via his mobile phone.

Who is Volodymyr Zelenskyy – Russia’s ‘number one target’?

“What do you think of Zelensky,” I asked. “Has he inspired you?”

“Right now, very much,” she replied. “I am proud that he is behaving this way, he is doing a great job right now, I support him.”

There was one question about the reality of this conflict that needed to be addressed. The Russian military is better equipped and far better trained, and the people of Dnipro will put themselves at risk of serious harm.

Yet most, like Sergei Sildiv, waved the idea from their minds.

“In my opinion, one Ukrainian soldier is worth at least seven Russian soldiers.”

“You really think you can win?” I asked.