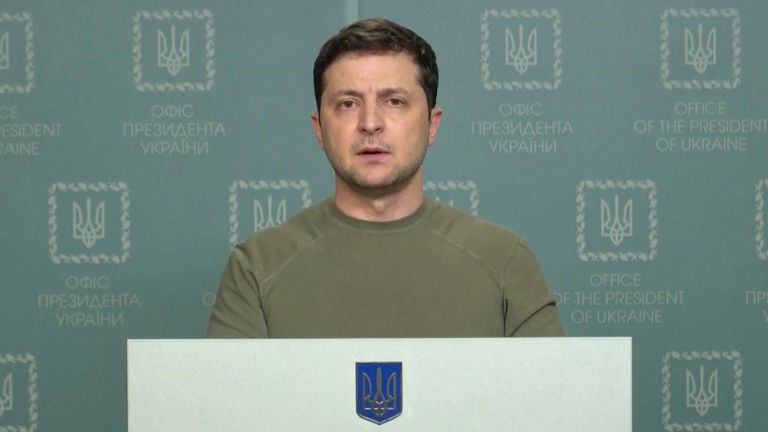 Videos of Ukrainian President Volodymyr Zelenskyy describing his country’s “heroic” efforts to fight off Russian forces are currently being broadcast around the world.

He appears in the social media clips unshaven, wearing a casual military green T-shirt and describing himself as “the enemy’s number one target”.

While hitting out at the West for failing to offer military support, he has also been pictured with Hollywood actor Sean Penn, who is making a documentary about the Russian invasion.

But Zelenskyy is no stranger to the world of celebrity. Here Sky News takes a detailed look at the Ukrainian leader – who got to where he is by playing the role on TV.

Ukraine leader: ‘I am target No 1’

Volodymyr Zelenskyy, now 44, was born in 1978 in Russian-speaking Kryvyi Rih, a southeastern region of what was then known as the Ukrainian Soviet Socialist Republic.

He was 12 when the Soviet Union dissolved and Ukraine gained its independence.

The son of Jewish parents, he was offered the chance to study in Israel as a teenager but stayed in Ukraine after his father refused to let him go.

He studied law at Kyiv Economic University but had always been more interested in comedy, joining Ukraine’s KVN TV comedy league at 17 and forming his own team Kvartal 95.

After a few years of success, which saw them travel to Moscow and a number of other ex-Soviet states, the Kvartal 95 comedy troupe founded its own production company and started making TV shows for the Ukrainian channel 1+1.

Well-known by this time, Zelenskyy started in a number of rom-com films, including Love in the Big City, and 8 New Dates.

But in 2015 a new role – playing a schoolteacher catapulted to the Ukrainian presidency by a viral political rant – changed his life forever.

In “Servant of the People” Zelenskyy plays the character of Vasyl Petrovych Holoborodko, who unexpectedly becomes leader of his country after an online video of him slating corrupt politicians is viewed by millions of people.

The show became so popular, amidst Ukraine’s struggle with oligarchs and corruption, that live on TV on New Year’s Eve 2018, Zelenskyy upstaged the country’s then-real leader, Petro Poroshenko, by announcing he planned to follow his character’s footsteps and run for president himself.

Like his on-screen persona, Zelenskyy and his new party – also called Servant of the People – bypassed the traditional campaign trail and instead ran his presidential bid almost solely on social media, by continuing to tour with Kvartal 95 and mocking his opponents in viral videos.

His manifesto was mainly focused on ending corruption in politics and the war with Russian separatist forces in the Donbas region of eastern Ukraine – the first to come under siege this week.

He won the 2019 presidential election with a landslide 73% of the vote in the second round over Mr Poroshenko and was inaugurated in May that year.

Zelenskyy was a vocal supporter of the 2014 protests, donating money to Ukrainian troops fighting off separatists in Donbas.

But although his promises to crack down on corruption continued, some questioned his motives, claiming he was trying to take power from the oligarchs only to centralise it around himself.

His links with the billionaire Igor Kolomoisky, who owns a 70% stake in the TV channel 1+1 which aired Servant of the People, were also scrutinised.

Just two months into his presidency, he faced direct allegations of corruption when he became embroiled in the scandal that would put former US President Donald Trump on trial for impeachment.

It emerged that Mr Trump had tried to bribe Ukraine into helping him, Rudy Giuliani and then-attorney general William Barr to investigate his opponent and now-President Joe Biden and his son Hunter.

Ukrainian officials didn’t give in to the US threat of withholding millions in aid and Mr Trump was later acquitted of impeachment.

In the year that followed Zelenskyy, whose character on TV was often portrayed as being out of his depth, had to navigate the coronavirus pandemic and subsequent economic fallout.

As the pressures of the pandemic subsided in October 2021 he faced another scandal when the Pandora Papers revealed – despite his anti-corruption election ticket – he and two of his closest advisers had a network of offshore companies across the British Virgin Islands, Cyprus and Belize.

He declared some offshore interests before the election, but the investigation revealed he had transferred stakes to friends just weeks before he won the vote to cover up his connections.

To counter accusations he had failed to deliver on COVID, the economy and corruption, Zelenskyy’s stance on Putin’s Russia intensified, which included sanctioning his so-called “man in Ukraine” Viktor Medvedchuk.

Mr Medvedchuk is the chairman of a pro-Russian political organisation in Ukraine and opposes the country joining the EU.

Around this time, in late 2021, satellite imagery began to show Russian troops and military equipment building up at various points along the border.

He has also called on NATO and EU leaders to expedite Ukraine’s bid for membership of both alliances, further aggravating the Kremlin and aligning himself increasingly with the West.

Although a longstanding critic of Putin’s regime, Zelenskyy has always reinforced his Russian links and been sure to differentiate between the country’s leader and its people.

His first language was Russian, switching between that and Ukrainian during public addresses in recent weeks.

He has also consistently opposed the proposed Ukrainian ban on Russian artists and cultural content.

Appealing directly to the Russian people on the eve of the invasion, he said: “I know that Russian TV won’t show my speech.

“But citizens of Russia need to see it. They need to see the truth, The truth is you need to stop before it’s too late.”

In hiding but still in charge

After Russian troops crossed the border and began an invasion, Zelenskyy is in hiding, but is still somewhere in Kyiv.

His family – his wife and childhood sweetheart Olena and their two children – are Russia’s “number two target”, he says.

Asked about the challenge he faces, both to stay alive and to push back the Russians, his former minister of finance and defence Oleksandr Danyliuk told Sky News: “This is a person who came with promises to bring peace and now, in his second year of presidency, there is a war.

“Not just a regular war, but the most significant war since the Second World War – so obviously it’s a big challenge for him.” 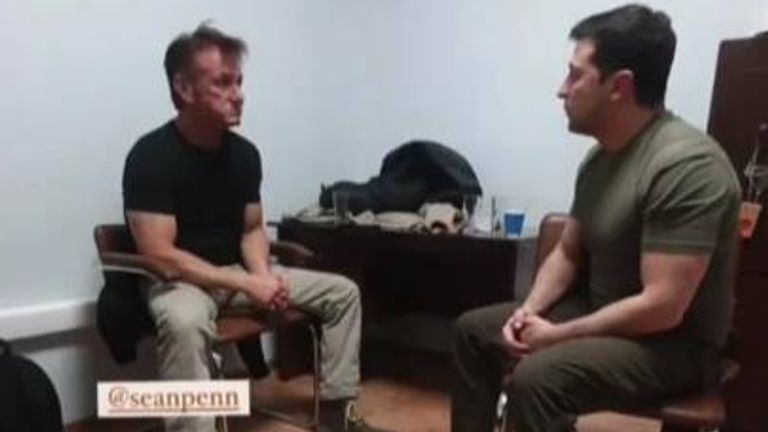 But quizzed on how Ukrainians feel about him now, he added: “There was a lot of criticism of him, but currently there is less and less, because there is no point now.

“We need to get united and defend the country. I think many people stop listening to the political messages and are more concerned about defending the places they live in.”

The power of podium appeal matters to politicians, perhaps as much as policy. So Volodymyr Zelenskyy’s poster boy credentials, switching from actor-comedian to president in a few short years seemed to put him in pole position.

But how long a world leader can dine out on celebrity has its limits, as I’m sure Donald Trump might attest.

Anyone who has googled Zelenskyy will know that before becoming Ukrainian president, he found fame playing the president in a popular TV show Servant of the People.

In the political satire, his character dishes out sedatives to senior aids at the whiff of a crisis. If only troubleshooting in real life was as easy.

But no amount of rehearsal could have prepared Zelenskyy for the war-torn scenes in Ukraine today.

Watching his inauguration in May 2019 I was reminded of Tom Cruise pressing the flesh on the red carpet.

It was high fives all round, Zelenskyy even jumped clean off the ground to kiss people in the screaming crowds of fans.

His unconventional brand was a very long way from his counterpart in Washington, President Joe Biden and indeed from Vladimir Putin.

Admittedly, it followed Ronald Regan’s switch from Hollywood actor to president, and Donald Trump morphing from reality TV star to world leader, but still, the UK equivalent would be for Veep creator Armando Iannucci, Rory Bremner or even Hugh Grant to be elected prime minister.

Zelensky’s life imitating art is on an unprecedented scale.

His performance in his laugh out loud, charming TV show, arriving at the government offices on his bicycle, convinced viewers (turned voters) that they had a rare insight into his political views and moral compass.

It came to serve as one hell of a political party broadcast, as well as undoubtedly a practice run to step into a wartime role that surely no one is qualified for.