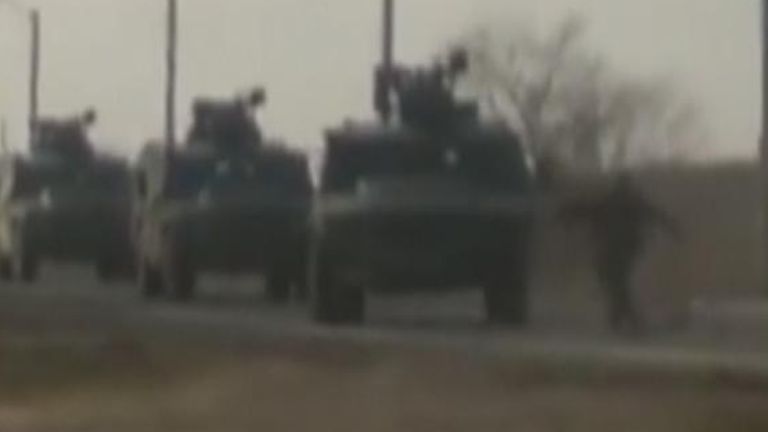 Vladimir Putin has appealed directly to Ukrainian troops and told them “it will be easier for us to agree if you take power in your own hands”.

During the address, the Russian president said it was “easier to negotiate with you” than the “gang of Nazis that has captured Kyiv” – an apparent reference to Ukraine’s leadership.

“I once again appeal to the military personnel of the armed forces of Ukraine: do not allow neo-Nazis and (Ukrainian radical nationalists) to use your children, wives and elders as human shields,” he said at a televised meeting with Russia’s security council.

“Take power into your own hands, it will be easier for us to reach agreement.”

Mr Putin went on to say Russian servicemen in Ukraine were acting “bravely, professionally and heroically”.

He claimed most Ukrainian military units were reluctant to engage the Russian forces.

Those unit offering resistance are mostly volunteer battalions made of right-wing Ukrainian nationalists, he claimed, providing no evidence for his claims.

Echoing an earlier Russian military statement, he accused Ukrainian forces of deploying heavy weapons in urban areas in several big cities, including Kyiv and Kharkiv, to use civilians as shields.

It comes as the Kremlin said Mr Putin had called Belarusian President Alexander Lukashenko to organise sending a delegation to Minsk for talks after Ukrainian President Volodymyr Zelenskyy offered to discuss Ukraine’s neutrality.

Earlier, Kremlin spokesperson Dmitry Peskov said Mr Putin was ready to send the delegation in response to Mr Zelenskyy’s offer, which indicated he would be willing to negotiate dropping his country’s bid to join NATO as Russia has demanded.

Mr Putin has claimed the refusal to discuss keeping Ukraine out of NATO prompted him to order military action to “demilitarise” it.

During an at-times tense exchange, Sky News diplomatic editor Dominic Waghorn asked Russia’s Foreign Ministry spokesperson Maria Zakharova how it could be acceptable for Mr Zelenskyy to surrender before he even begins negotiations.

Ms Zakharova replied: “It is true such work can start anytime, the only question is whether the other side – under the influence of the west – will start trying to weasel out of lie, or you yourselves, the representatives of the Kyiv regime, would start contradicting and debunking each other.”

Mr Waghorn pushed her further on the question, asking: “Can you explain how your describing this as the end of the war when it could be the beginning of the biggest military offensive we have seen in Europe since World War Two?”

She said: “Well no, I’m not going to fantasise this. This has nothing to do with the situation at hand. We are pursuing a stage by stage approach. The operation is ongoing, it has stated objectives, (the) Ministry of Defence is making its comments.