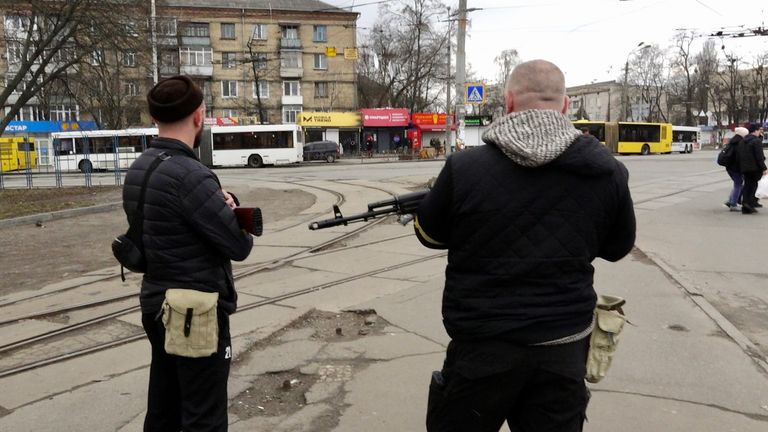 The soldiers, the civilian militia, the police – they’re all really jumpy now. And who can blame them?

Air raid sirens and constant explosions fill the air as the Russians near Kyiv’s centre.

It makes reporting hard because all of the above are suspicious of us, bordering on paranoid, occasionally pointing their weapons as we film, telling us to stop. 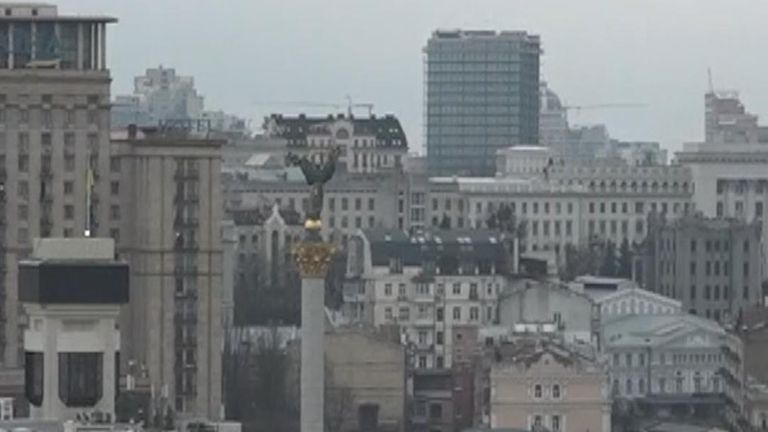 This has not been my experience of the Ukrainian military as we have filmed with them in recent months.

But the situation is fundamentally different now.

They usually calm down when we say we are British because there’s a lot of appreciation for some of the military assistance and defensive weapons provided by the UK.

The truth is many of the country’s defence forces are incredibly young and very inexperienced.

Putin ready to negotiate with a caveat – follow latest updates

We met 21-year-old Sergiy Petroshenko guarding a footbridge in the capital. He was doing the job alone.

He was very polite and accommodating. Speaking fluent English, he said we could film Kyiv’s magnificent skyline as long as we stayed with him and didn’t wander off.

As we began to chat, I realised he was desperately sad and wanted to talk. He told me he just wanted to go home but felt duty bound to defend his country.

Mr Petroshenko himself seemed incredulous when he explained that in his entire military career, he had fired his weapon just 16 times – on a range. That’s 16 bullets.

“And now I’m going to shoot people to protect my country? I don’t want this to happen,” he told me.

Like so many here, he’s mystified by the events unfolding before him and overwhelmed with worry for his family who live in the Sumy region.

“There is a Russian base in my village and from my village they’re going to go here on Kyiv to capture it, yeah, it’s really scary and terrifying,” he said.

“I called my parents they’re really scared. There’s Russians in our village, enemies. There’s tanks, heavy vehicles,” he said, briefly pausing and drawing breath through a sigh, “I hope they will be fine…

“I hope it’s going to be okay, that I’m going survive, and the Russians step back,” he said before shaking my hand. I will be honest I had a lump in my throat as I waved goodbye and wished him luck.

Be under no doubt, this European capital is fast turning into a battlefield. There are Ukrainian troops on street corners and under bridges.

Beneath a motorway flyover we watched as tanks, armoured personnel carriers and military trucks tried to take cover from potential attacks from the skies.

There’s been a huge exodus from the city.

We saw people trying to hitch rides out of the capital, trying to head west towards Ukraine’s border with Poland.

Every so often the air raid sirens would blare, sending them running for cover towards metro stations trying to get below ground.

Mums and dads and their little ones, trying to find safety if they can’t find a way out of the city.

Hardly any people in the centre of town – just a few cars moving between homes or looking for the few shops that are still open.

When news of an evacuation train from Kyiv to Lviv was announced, thousands descended on the central railway station to try to get seats on any trains west.

It was a chaotic and desperate scene as we moved through the crowd in the station’s main foyer.

But that’s exactly what it’s like here now. Every day is more desperate than the last. What is going to happen here is completely unknown, and it’s that fear of the unknown that is so difficult for the people.

Right now Ukraine is holding its breath, while the world watches on.