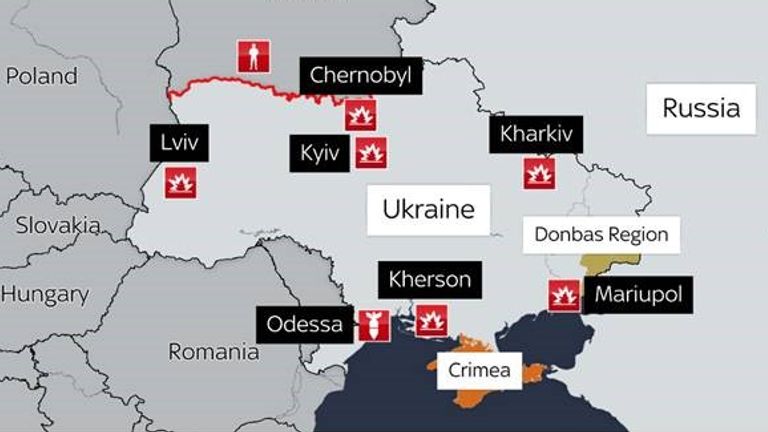 Ukraine is facing an onslaught from Russian forces on several fronts, with various targets across the country being attacked with a barrage of missile strikes.

Ukrainian armed forces believe more than 60 Russian battalion tactical groups – the equivalent of between 30,000 and 60,000 troops – have been deployed on Ukrainian territory, according to an update on the invasion.

President Volodymyr Zelenskiy said early on Friday that 137 people inside Ukraine had died and 316 had been injured in Russian military attacks.

The Russian invasion is the biggest attack on one country by another since the Second World War – here is the latest on what we know is happening in key locations:

Russian forces have entered the city and appear to be advancing on the city centre. Taking the Ukrainian capital is believed to be President Putin’s aim.

The advance on the city appears to have been quick – the US said early on Friday morning that it understood Russian troops were 20 miles away.

Footage posted online by Ukrainian citizens earlier appears to show Russian tanks driving through Obolon, in the wider Kyiv district and about 5.5 miles north of the city centre.

Ukrainian national guard troops were pictured in central Kyiv this morning lining up with their guns, seemingly in readiness for an imminent attack.

Meanwhile, Mayor Vitali Klitschko says three people were injured after a rocket attack on a residential building in the capital and a battle has been ongoing for the Hostomel airbase near by.

Russian troops have reportedly taken the site of the nuclear power plant.

Ukraine’s nuclear agency said it is recording increased radiation levels in the area, but that the rise was “insignificant” and caused by the dust raised by Russia moving in its military equipment. 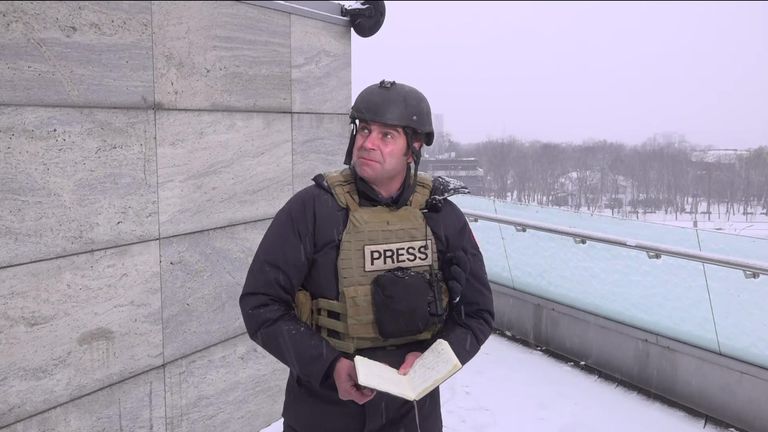 Russian attacks focused on military targets, including an airbase in nearby Chuhuiv, and Ukrainian forces have been involved in fierce fighting with the invading troops.

A number of loud explosions were heard around the city on Friday morning.

Sirens sounded after more shelling was reported in Lviv, which is soon expected to find itself hosting refugees from other parts of Ukraine as people flee westwards.

At least 18 people have been killed after a missile attack at the significant port complex.

Ukrainian officials said all 13 border guards deployed on the island were killed by arms fire from a Russian warship, having reportedly told an officer on board the vessel to “go f*** yourself” when asked to surrender .

A missile strike has been reported at the border post, killing and wounding a number of guards.

Rivne’s mayor said missile strikes had targeted the city’s airport on Friday morning, although no injuries or serious damage was recorded.