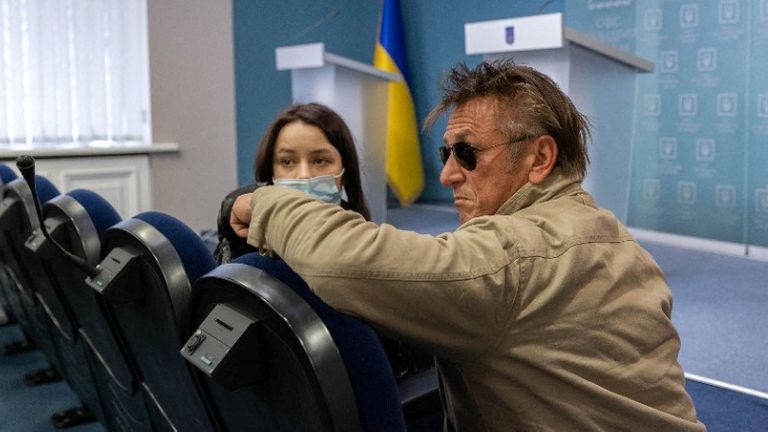 Sean Penn has been pictured at a press briefing at the at the Presidential Office in Kyiv, as he works on a documentary in Ukraine about the ongoing Russian invasion.

Wearing sunglasses and with the collar of his jacket turned up, the 61-year-old listened intently, with a colleague sat close beside him to assist with translation.

Penn is also understood to have met with Deputy Prime Minister Iryna Vereshchuk, as well as speaking to journalists and military personnel about the Russian invasion.

“The director specially came to Kiev to record all the events that are currently happening in Ukraine and to tell the world the truth about Russia’s invasion of our country.”

The Ukraine is currently under heavy attack, with more than 100 people killed and 100,000 civilians fleeing their homes in a bid to escape rocket strikes.

It is not the first time Penn has been in Ukraine, who was last in the country in late November.

At the time, photographs showed the star visiting the frontlines of the Ukrainian armed forces near the Donetsk region.

Penn has been involved in numerous international humanitarian and anti-war efforts over the years and founded the non-profit disaster relief organisation CORE in response to the 2010 earthquakes in Haiti, chronicled in the documentary Citizen Penn.

He also deployed teams to help with COVID-19 testing and vaccinations during the pandemic.

The documentary project he is working on is being produced by VICE Studios.