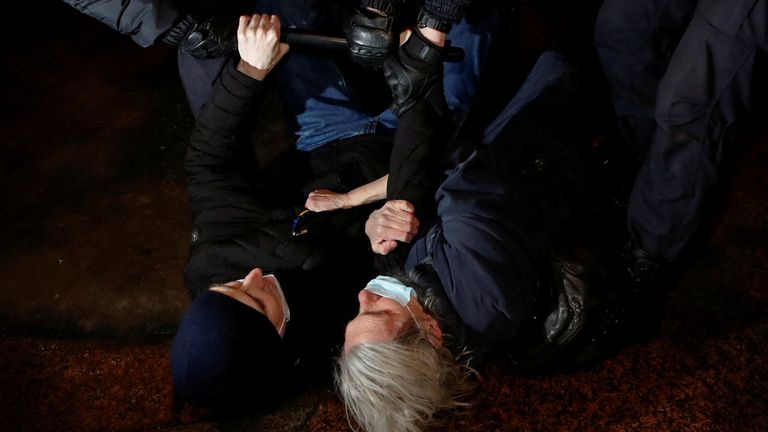 More than 1,700 anti-war protesters have been arrested across 54 cities in Russia – as scores of demonstrators voice their fury over Vladimir Putin’s invasion of Ukraine.

At least 957 people were detained in Moscow as Kremlin forces advanced on the Chernobyl nuclear disaster site on Thursday.

Hundreds also took to the streets in Saint Petersburg and the city of Yekaterinburg.

A number of Russian public figures have spoken out against Moscow’s bid to seize control of its neighbour.

Director of a state-funded theatre in the Russian capital, Yelena Kovalskaya, announced on Facebook that she was quitting her job – writing how it is “impossible to work for a killer and get paid by him”.

Engineer Yekaterina Kuznetsova said: “This is the most shameful and terrible day in my life. My country is an aggressor.

“I hate Putin. What else should be done to make people open their eyes?”

Human rights activist, Marina Litvinovich, urged Russians to take to the streets to show their opposition to the violence unfolding.

She said in a video statement on Facebook: “We, the Russian people, are against the war Putin has unleashed.

“We don’t support this war, it is being waged not on our behalf.”

Eyewitness: Air raid sirens blare out as explosions rock Kyiv – where a major exodus is underway

However, authorities have launched a crackdown on critical voices, with Litvinovich among those detained.

Meanwhile a petition started by prominent human rights advocate, Lev Ponomavyov, has been signed by more than 330,000 within hours of being launched.

More than 250 journalists added their names to an open letter decrying the aggression.

Another letter was signed by around 250 scientists, while almost 200 municipal council members in Moscow and other cities backed a third letter.

The first day of bloodshed has claimed the lives of 57 people and left 169 wounded, according to Ukrainian health minister, Oleh Lyashko.

Chernobyl fell after Ukrainian troops battled for hours with their Russian rivals, according to the Ukrainian prime minister Denys Shmyhal.

The violence has sparked anger across the globe with hundreds gathering outside the Russian assembly in Tel Aviv, Israel, where four people were arrested on suspicion of scrawling anti-Putin graffiti.

Protests have also been held across Europe, including in the UK, Spain, France, Switzerland, Denmark, Hungary and Poland.

Inside the mind of Vladimir Putin – why is he invading and what does he want?

Dozens of Ukrainians also stood together in front of the Irish parliament, joined briefly by Taoiseach Micheal Martin – who promised Ireland will back the “strongest and most comprehensive” package of sanctions to punish Putin’s regime.

In Edinburgh, protestors held Ukrainian flags aloft and chanted “Glory to Ukraine” outside the Russian consulate in the Scottish capital’s New Town.

Meanwhile hundreds sung the Ukrainian national anthem outside Downing Street in central London as they demanded Britain and other democracies ramp up action against Russia.

Natalia Ravlyuk, who helped organise the protest, said they wanted the “toughest sanctions and total isolation of Russia now”.

“We… feel betrayed by democratic states because we have been talking about this war for eight years,” she said.

“They just need to wake up and stop Putin now.”

Prime Minister Boris Johnson unleashed what he called the UK’s “largest set of sanctions ever” on Russia following the invasion.

And President Joe Biden also announced new measures in a bid to “maximise long-term impact” on Russia, while minimising the impact on allies.