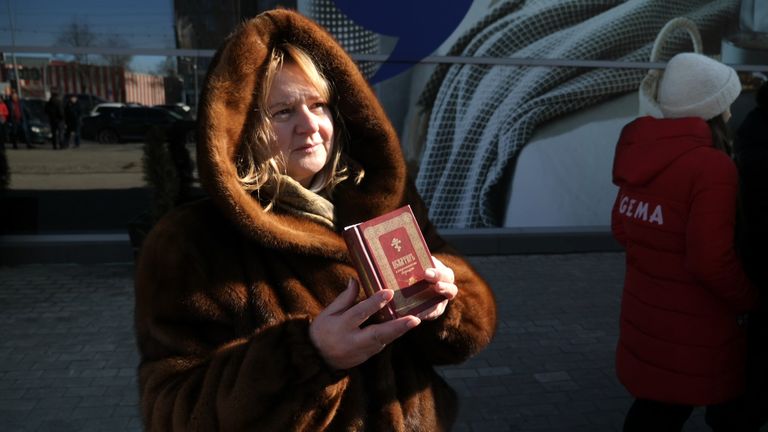 The people of Kharkiv awoke with a shock to find Vladimir Putin was targeting their city.

The prospect had been discussed although largely as a hypothetical. Ukraine‘s President, Volodymyr Zelenskyy, had even considered it in a speech made in January.

But this unlikely threat has become Kharkiv’s new reality.

Russia’s invasion was announced with an artillery barrage, the rhythmic thud of 10 or more shells landing on the city outskirts in the early morning hours. The explosions were powerful and rattled the windows in our city centre hotel.

Later, the national police force reported a “deep breakthrough” of Russian forces in the regions of Kharkiv and Chernihiv with checkpoints breached in multiple locations.

In the Kharkiv centre, the enemy has gone unseen but their presence has been felt by all. Offices and schools had been shut although a small number of shops, supermarkets and pharmacies sported queues with worried-looking residents.

Dimytro Ivanov had been waiting in the cold outside the “Visit Supermarket”.

“How are you feeling,” I asked.

“Anxious, everybody knows what’s happening today, and like all people today we are expecting bad news.”

They don’t usually queue for the supermarket but today was anything but normal. A woman named Elena was reading her bible as she tried to get in.

“I am a person of God, I am asking God to help, save our lives, save our country, save our city.”

The competition for petrol and diesel in the city is fierce as many try desperately to leave the city.

Some will aim for Moldova in the south. Others will head west for the border of the European Union. The Polish president, Andrzej Duda, has pledged to find a place for every refugee.

At one overwhelmed filling station with found a woman called Alexandra in a car packed with suitcases.

“We woke at 5 o’clock from these hits, we were stressed, there was not enough time to take our clothes. I don’t know if I took everything important but may God help me, may God help us all.

“I will sit in my car and pray, we can’t don’t anything else.”

As we toured the city limits, we found that the Ukrainian Army had taken up positions with tanks and armoured personnel carriers. But their presence in Kharkiv is anything but overwhelming.

Yet the one thing they can count on is the support of the people who live here. The largest queue we saw stretched out in front of the regional blood donor clinic.

I spoke to a young man called Oleksandr Menzerov who was desperate to make a contribution.

“I have no combat experience, I can’t protect my country with guns but I’ll do anything I can to get peace, to get our army through this. They (troops) are over there, protecting us right now.”

The blood clinic manager, Yuri Verhovenko, took us on a tour. He said he hadn’t seen so many people since the beginning of the conflict with Russia, in 2014.

“We are not the heroes, we are doing our job. The heroes are the people who have come to give blood because they share a part of themselves, to save other people.”

On the grand concourse of the city’s train station, we met reluctant travellers who had made life-changing decisions in less than an instant.

A couple called Alina and Yuri told us they will make the long journey to Poland.

“I don’t want to live in a country where we have death, where you just think about how to survive because you are helpless,” said Alina.

However, the pair worried about the prospect of not being able to return. For Yuri, it was all too much.

“The first thing you have to do is to believe in yourself, to fight and I hope our army can handle this.”

With this, he broke down and we left them in a tearful embrace.