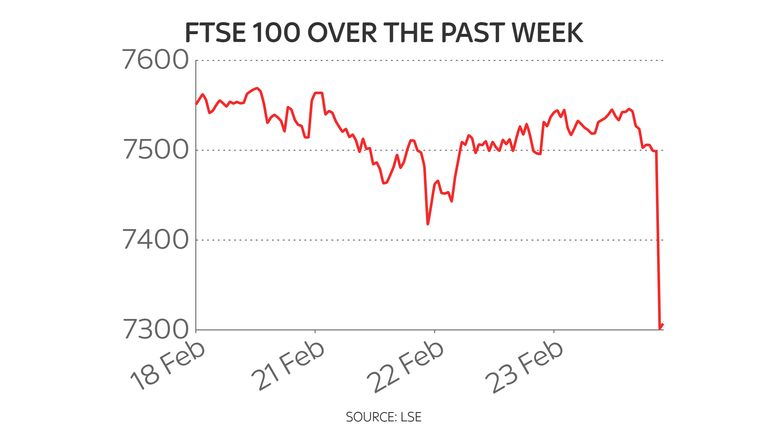 The heightened invasion of Ukraine by Russia has sparked a rush for safe haven assets and sent the cost of Brent crude oil above $100 a barrel for the first time since September 2014.

Fears of a wider conflict, additional sanctions and higher inflation arising from President Putin’s order to attack prompted a rush of activity on global markets, first felt in Asia where stock markets were widely down by 3%.

Germany’s DAX and the CAC in Paris were 3.5% lower at the open, while the commodity-heavy FTSE 100 in London started the day 2.6% down – partly shielded from the worst as the price of oil, gas and things such as metals shot up.

Explosions near major cities in Ukraine – follow the latest updates

Financial services and stocks linked to consumer spending, such as retailers, felt some of the worst pain on London’s blue chip index initially, with only a handful of stocks in positive territory.

Evraz and Polymetal – two miners with major operations in Russia – were the biggest fallers, by 27% and 35% respectively.

Travel stocks were hit too as flights to Ukraine were widely suspended, with airlines forced to divert planes away from Ukraine airspace.

A collapse in the value of the rouble versus the US dollar – to a record low – meant the dollar-linked RTS index had lost almost 50% of its value at one stage in Moscow.

Brent crude, the international oil benchmark, rose by more than $4 a barrel on reports of the first explosions in Ukraine.

It continued to climb to above $103 as the full extent of the invasion became clearer, signalling additional price pressures for a global economy already battling a COVID-linked surge in inflation.

Prices for wheat, corn and other food staples also rose.

“In commodities, the European natural gas futures are already up 10%… US (WTI) crude jumped past the $98 mark.

“Gold flirts with the $1,950 per ounce and the bulls are already to target a further advance toward the $2,000 threshold.

A big move of money towards the US dollar forced other currency values down against the greenback.

Cryptocurrency was battered too – with Bitcoin’s sensitivity evident through a 6% slide to $35,000.

Russ Mould, investment director at AJ Bell, said of the FTSE 100’s decline: “Shell only dipped 0.4% whereas BP was down by a greater amount at 2.6% which can be explained by its near-20% stake in Russian oil producer Rosneft whose own shares dived 40% on Thursday.

“The surge in the oil price is terrible news for businesses and consumers, and fundamentally this clarifies one of the key impacts of the Russia/Ukraine war – it will serve to further stoke inflation.

“Not only will energy bills keep going up, but food prices look set to jump even higher.

“Ukraine and Russia are both big food suppliers and any disruption to supplies will force buyers to seek alternative sources, which could jack up prices,” he warned.