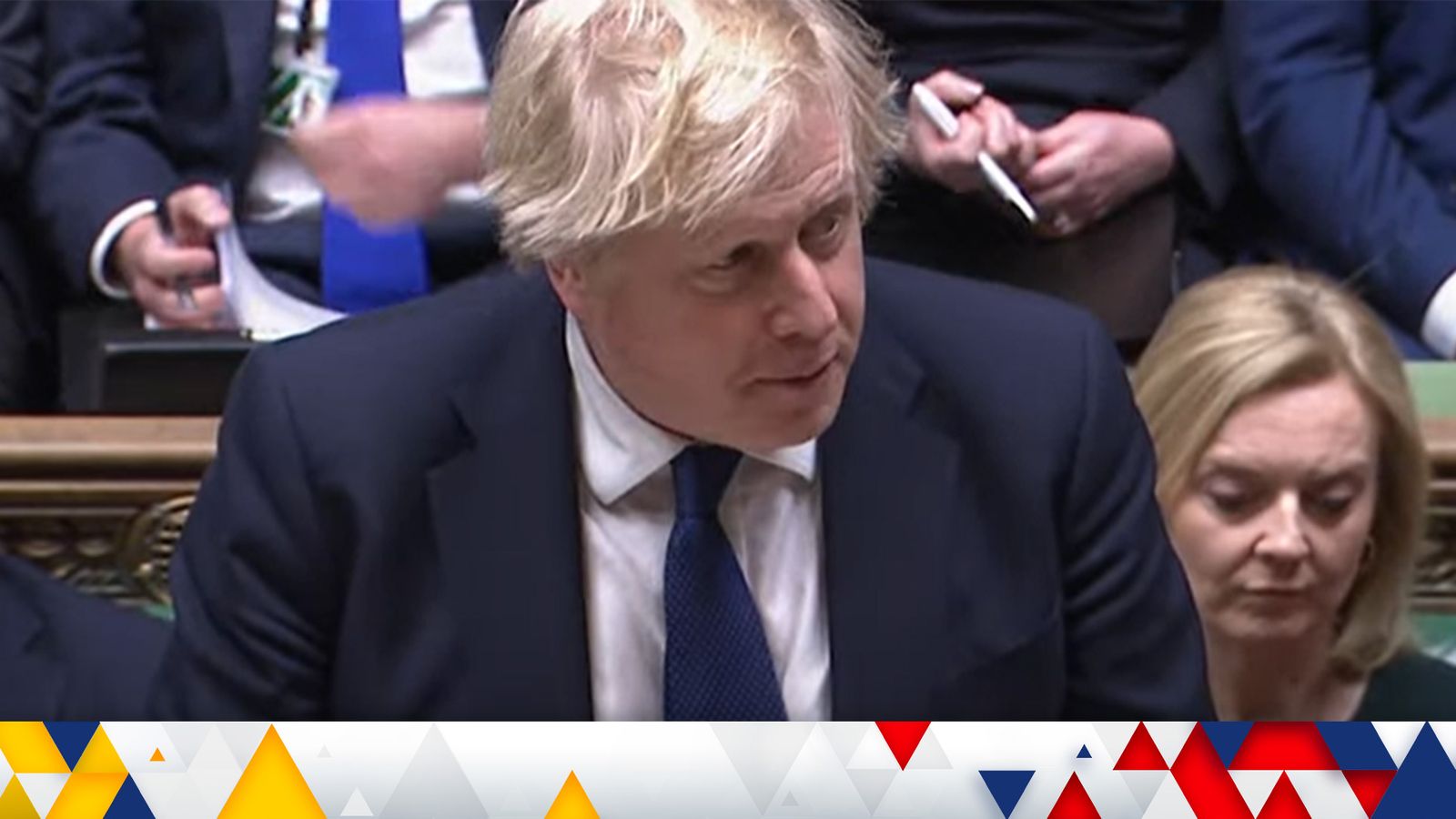 Boris Johnson has hit Russia with what he called the “largest set of sanctions ever imposed anywhere by the UK government” – targeting individuals including President Vladimir Putin’s former son-in-law.

The prime minister said there are also plans to introduce legislation that would limit the amount of deposits Russian nationals will be able to hold in UK bank accounts and to work with G7 and NATO allies to shut off the country’s access to the SWIFT payment system.

The measures will come into force as soon as they are laid in parliament, which for some is likely to be as soon as next week.

Whitehall officials said they expected the economic impact of the collective sanctions would be significant, potentially knocking several percentage points off Russia’s GDP over the next 12 months

Addressing MPs, Mr Johnson said: “Putin will stand condemned in the eyes of the world and of history. He will never be able to cleanse the blood of Ukraine from his hands.

“Although the UK and our allies tried every avenue for diplomacy until the final hour, I am driven to conclude that Putin was always determined to attack his neighbour, no matter what we did.

“Now we see him for what he is – a bloodstained aggressor, who believes in imperial conquest.”

The prime minister added that “this hideous and barbarous venture of Vladimir Putin must end in failure”.

• To issue sanctions against individuals, entities and their subsidiaries which include Rostec – Russia’s largest defence company

• To extend the full range of these measures to Belarus

What would SWIFT sanctions mean for Russia and the West?

Cutting Russia off from the SWIFT global payments system would be one of the toughest sanctions the West could impose.

But it would also involve pain for foreign banks and other creditors that do business with the country.

It is an important cog in the world’s financial system and overseen by central banks in the United States, Japan and Europe.

Ukraine’s foreign minister has called for Russia to be cut off from SWIFT and that call has been backed by other governments including the Czech Republic. There has been a clear reluctance more broadly to do so.

The prime minister said: “Overall we’ll be imposing asset freezes on more than 100 new entities and individuals, on top of the hundreds we’ve already announced.

“This includes all the major manufacturers that support Putin’s war machine.”

He said “oligarchs in London will have nowhere to hide” and that when it comes to further measures, “nothing is off the table”.

The PM said his government will support Ukrainians “economically, diplomatically, politically, and yes militarily”, but reiterated that the success of the measures outlined depends on the “unity of our allies”.

It comes after Russia launched a military offensive overnight against its neighbour with missile strikes and explosions reported across Ukraine.

According to Western officials, Russia intends to seize and control a large section of Ukraine.

Their current assessment of Russian military movements indicates that Kyiv, Odessa, Mariupol and separatist areas in Ukraine’s Donbas region could all be targeted.

The officials added that it was unclear whether taking control of the whole of Ukraine was an immediate objective of the Kremlin.

PM vows to protect Britons from cost of living crisis

Amid concerns about rising oil prices since the invasion, the prime minister vowed to do “everything possible” to safeguard “our own people” from the repercussions of the invasion on the cost of living.

“The government will do everything possible to safeguard our own people from the repercussions for the cost of living – and, of course, we stand ready to protect our country from any threats including in cyberspace,” he told MPs.

In a televised address earlier today, the prime minister vowed to hit Russia with a “massive” package of sanctions – designed to “hobble” Moscow’s economy – after Mr Putin’s “vast invasion” of Ukraine by land, sea and air.

The PM said the Russian president had “unleashed war in our European continent” with a “hideous and barbaric venture”.

PM to host another meeting of COBRA on Ukraine

Downing Street confirmed the PM will host a COBRA meeting at 7:30pm after taking questions in the House of Commons, and then will convene with members of his cabinet at 8:30pm.

Officials also confirmed government buildings will be lit blue and yellow this evening and fly the Ukrainian flag in support of the nation.

After giving his backing to the new measures and sanctions outlined by the PM, Sir Keir called for further aid, including humanitarian support for Ukraine.

“There are changes we must make here in the UK. For too long our country has been a safe haven for the money that Putin and his fellow bandits stole from the Russian people. It must now change,” the Labour leader said.

“Vladimir Putin has initiated war in mainland Europe, the response must be unequivocal and absolutely clear,” she added.