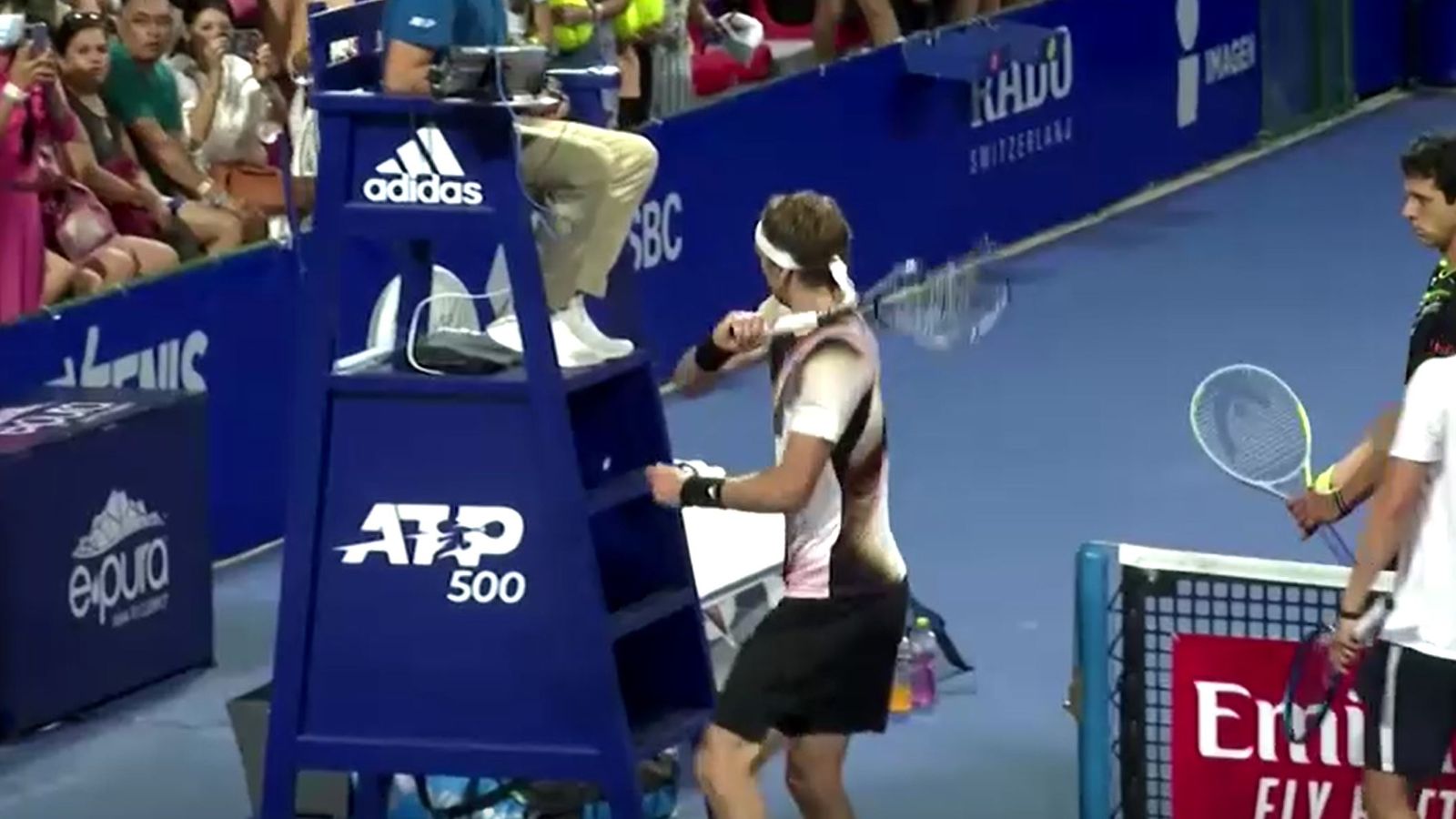 World number three tennis player Alexander Zverev has been kicked out of a tournament in Acapulco after repeatedly smashing his racket against the umpire’s chair.

The German faces a hefty punishment after the aggressive incident.

It happened after Zverev and his Brazilian partner Marcelo Melo were beaten 6-2, 4-6, 10-6, by Britain’s Lloyd Glasspool and Finland’s Harri Heliovaara.

Due to unsportsmanlike conduct at the conclusion of his doubles match on Tuesday night, Alexander Zverev has been withdrawn from the tournament in Acapulco.

After the four players shook hands at the net, Zverez turned to the umpire and aggressively hit his racket against the chair three times, almost hitting the official’s leg with one swing.

As the umpire stood to climb down from his chair, the 24-year-old walked back over and took another swing.

Tournament organisers said Zverev would play no further part in the Mexican Open, posting on Twitter: “Due to unsportsmanlike conduct at the conclusion of his doubles match on Tuesday night, Alexander Zverev has been withdrawn from the tournament in Acapulco.”

The ATP has yet to announce any sanctions, but its website shows Zverev’s second-round opponent in the singles, Peter Gojowczyk, has been given a walkover.

“It is difficult to put into words how much I regret my behaviour during and after the doubles match yesterday,” he wrote.

“I have privately apologised to the chair umpire because my outburst towards him was wrong and unacceptable, and I am only disappointed in myself.

“It should not have happened and there is no excuse. I would also like to apologise to my fans, the tournament and the sport that I love.

“As you know, I leave everything on the court. Yesterday, I left too much. I’m going to take the coming days to reflect – on my actions and how I can ensure that it will not happen again. I am sorry for letting you down.”

This is what Alexander Zverev has posted on his Instagram account after smashing his racquet repeatedly into the chair of the umpire within an inch of his feet, and getting thrown out of Acapulco … pic.twitter.com/oXvmt8lETS

There have been calls for Zverev to be suspended, with coach Brad Gilbert and former player-turned-broadcaster Patrick McEnroe, brother of US tennis legend John McEnroe, saying the player should face further punishment.

When Andy Murray was asked about the incident, he said: “Look, it was not good. It was dangerous, reckless.

“I obviously understand lots of players, athletes across lots of sports, can get very frustrated. Certainly me, myself, I’ve not always acted in the way I would want on the tennis court. I’m certainly not claiming to be an angel. I’m not perfect myself.

“However, when you’re ripping your tennis racket right next to the umpire multiple times, yeah, you can’t be doing that.

“I know obviously one of the British guys who was playing, as well, a bit dangerous. It’s graphite flying off the racquet, as well. Yeah, it was not good.”