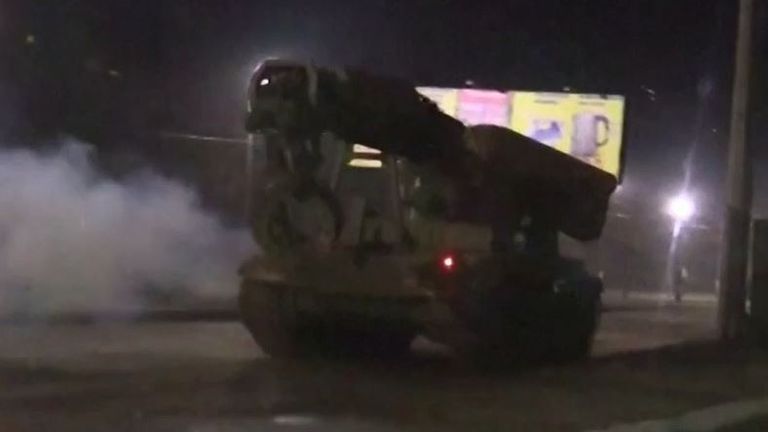 The UK is to hit Russia with a “first barrage” of economic sanctions as Boris Johnson warned Vladimir Putin is fixed on a “full-scale invasion of Ukraine”.

Speaking after a meeting of the government’s emergency COBRA committee, which began at 6.30am, the prime minister warned the Russian president was aiming for “the over-running, the subjugation of an independent, sovereign European country”.

Mr Putin on Monday night recognised two breakaway areas of eastern Ukraine as independent states and ordered Russian forces to carry out “peacekeeping” duties in the Donetsk and Luhansk regions.

Ukraine key developments:
• Tanks seen on roads near city of Donetsk overnight
• International condemnation at UN Security Council as Putin recognises independence of separatist regions
• Kyiv says it will ‘not give in to provocation’
• EU and US also ready to impose sanctions

“He’s sent troops in, he’s broken international law, he’s repudiated the Minsk agreements, and torn up the understanding from Budapest in 1994 that Ukraine’s territorial integrity would be respected,” he said.

“He’s completely torn up international law and we will immediately institute a package of economic sanctions, which I think his people would expect.

“Targeted not just at entities in Donbass, in Luhansk and Donestsk, but in Russia itself targeting Russian economic interests as hard as we can.”

Mr Johnson is due to set out further details of the fresh sanctions in the House of Commons later on Tuesday.

He said these were the “first barrage” of measures as “there is more Russian irrational behaviour to come”.

“I’m afraid all the evidence is that President Putin is indeed bent on a full-scale invasion of the Ukraine,” the PM added.

Mr Johnson predicted a full Russian invasion of Ukraine would be “absolutely catastrophic” but expressed his hope there still might be a diplomatic route out of the crisis.

Health Secretary Sajid Javid earlier told Sky News the invasion of Ukraine “has begun” and Europeans were “waking up to a very dark day”, as tanks and armoured vehicles were seen overnight near Donetsk.

“It’s clear from what we have already seen and found out today that the Russians and President Putin have decided to attack the sovereignty of Ukraine and its territorial integrity,” Mr Javid told Kay Burley.

“And, from the reports or I think we can already tell, he has sent in tanks and troops.

“So I think, from that, you can conclude the invasion of Ukraine has begun.”

Mr Javid said Ukraine had been assured of UK support, while he also urged any British citizens remaining in Ukraine to leave the country as commercial flights are still available.

The Foreign Office has previously said that any new sanctions on Russia would be linked directly to Russia’s agitation over Ukraine, as well as Kremlin-linked organisations and businesses of “economic and strategic significance” to the Russian government.

This includes their owners, directors and trustees.

Russia has vowed to retaliate if new sanctions are imposed by the UK.

“It must be met with immediate sanctions. If the UK government introduce these sanctions this afternoon in the House of Commons it will have Labour’s full support.

“But it’s important also that our sanctions and our actions now to confront Russian aggression are taken in unity with NATO allies and the EU.”

Conservative MP Tobias Ellwood, the chair of the House of Commons defence committee, said there was a “requirement” for the UK to move towards supplying Ukraine with offensive weaponry.

“We need to recognise that we have a duty to our Ukrainian friends, NATO needs to remind itself what it says on the tin; it is European security,” he told Sky News.

“We cannot part what happens in Ukraine, outside the NATO family, and just watch what happens.”