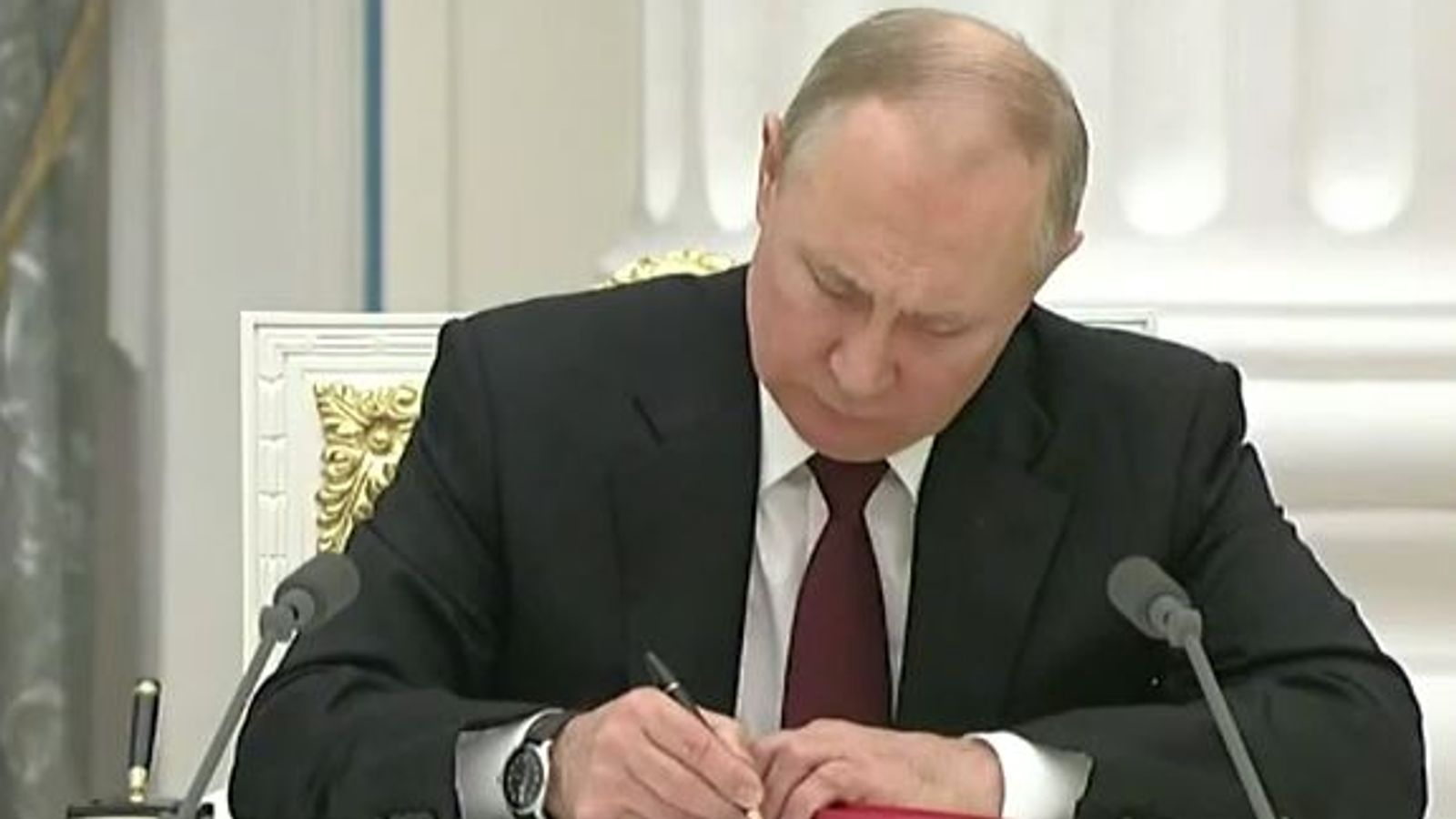 Vladimir Putin has declared he recognises two separatist regions in Ukraine as independent.

The Russian president made the announcement during a live TV address which lasted around an hour.

It comes after requests by the leaders of Russian-backed Luhansk and Donetsk – which broke away from Kyiv’s control in 2014.

Recognition by the president of their independence could provide a pretext for Russian troops to cross the border into those areas.

And it could further narrow diplomatic options to avoid war, since it would be a rejection of a seven-year-old ceasefire brokered by France and Germany, which is still pushed as the framework for any future negotiations on the crisis.

There has been fighting in the breakaway regions between pro-Russian separatists and Ukrainian pro-government forces for several years.

More than 14,000 people have been killed since conflict erupted in Donbas (which includes Luhansk and Donetsk) in 2014, shortly after Moscow annexed Ukraine’s Crimean Peninsula.

Shelling has intensified since last week along the frontline between the rebels and Ukrainian forces.

She said: “This essentially paves the way for the Federation Council, the upper house [of the Russian parliament], to authorise military to go into those separatist republics and then who knows where they go from there.

“Phase one could just be sending in the troops, but then of course you have a situation where Russian troops are facing off against Ukrainian troops directly – up until now it’s essentially been a proxy battle where Russian weapons, and back in 2014-15 some Russian forces, but far less now, were fighting each other in this long eight-year war.

“Then you will have a situation where you have Russians against Ukrainians. You might have skirmishes which would give further justification to go further. We also heard in the security council today suggestions that they should recognise the entire region of Donetsk and Luhansk as independent.

“Now the separatists only occupy parts of those two regions and that would mean Russia pushing towards the borders.”

On Friday, the rebels started bussing tens of thousands of civilians to Russia, accusing Kyiv of planning an attack – which Ukraine denies as propaganda.

Ukraine and the West consider the rebels to be Russia’s proxies, and have been warning for weeks that Moscow might use them to construct a case for war.

An estimated 150,000 Russian troops have now massed on Ukraine’s borders amid fears of an invasion. The US puts the figure at 190,000.

The Russian president denies he is planning to invade his neighbour, saying his forces are there for military drills.

But Moscow has threatened unspecified “military-technical” action unless it receives sweeping security guarantees, including a promise that Ukraine will never join NATO.

At a televised meeting of his Security Council, which normally meets behind closed doors, Mr Putin restated Russia’s demands, insisting it was not enough for the West to say Ukraine was not ready to join NATO at present.