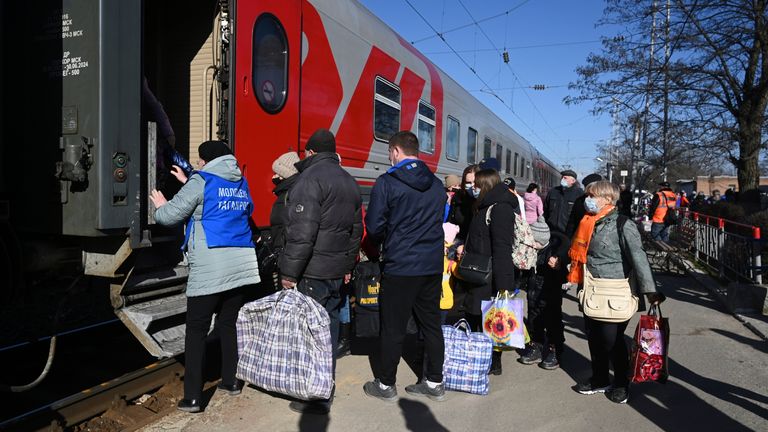 Officials in the Russian-backed separatist areas of eastern Ukraine have taken to press ganging fighting-aged men as old as 60 into their militias.

It’s reported by multiple close Sky News contacts that the men are being snatched from cars heading to the border with Russia, on the streets of Luhansk (a major city) in broad daylight, and in bars in the city of Donetsk late at night.

Armed gunmen are visiting businesses and asking for lists of male employees. And we are told they are also asking for details of any vehicles the companies may hold.

Clearly distraught, our contacts, who we are not naming for their own safety, have painted a picture of growing anxiety and distress.

They say they and their friends are now effectively living in hiding.

“I’m keeping low, Stuart,” my friend of many years told me during an ongoing exchange.

“They force those who had already been in the army or those having fun in the evening, or trying to escape to Russia,” he said.

“It still feels rather safe to move during the day here (Donetsk), though in Luhansk they do catch men on the street during the daytime. We might have the same soon.”

All men over the age of 18 are receiving “military subpoenas” to attend recruiting stations – others receive “urgent phone calls” also ordering them to attend.

“Officially it is 18-55 years old, but now they have extended up to 60,” a resident confirmed.

We have been sent a picture of one of these “military subpoenas” one man received through his post box.

The image as published here has been cropped and some information obscured to protect our source’s identity. Sky News has seen and verified the original image.

We have also been sent video purportedly showing the military police known as the “VAI” standing outside a major shopping centre in Donetsk, appearing to stop and question men, before taking them away with paperwork in hand. Sky News has been unable to independently verify the footage.

Another contact inside the city of Donetsk, told us: “Once they get to the recruiting station, they are moved to barracks, sometimes without any medical checks.

“Therefore, most men are hiding in their homes, you can’t see men out on the street,” he said.

It comes after Denis Pushilin, the leader of the so-called Donetsk People’s Republic (DPR), ordered a mass evacuation of hundreds of thousands of women and children, and the elderly, towards Russia. 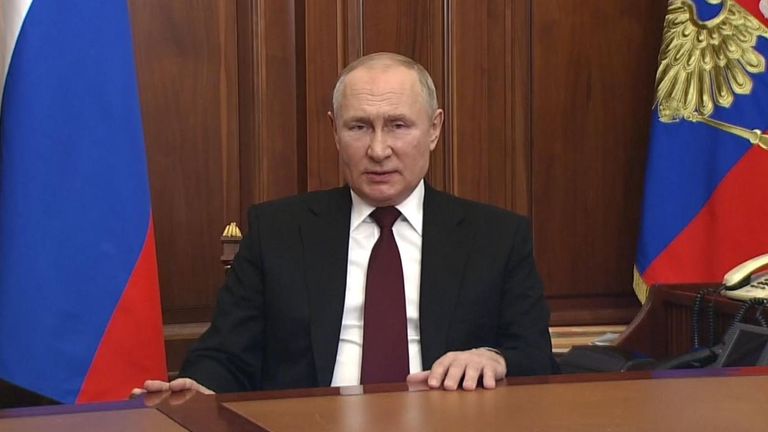 It’s widely reported that these buses full of evacuees are now stuck in freezing conditions along the border with little assistance or medical aid.

Western analysts believe this is a concerted effort to create a pretext for invasion – by creating a humanitarian emergency.

The DPR is warning that Ukraine plans to invade, but neither Sky News reporting from the western side of the demarcation line, nor other independent media outlets on the eastern side, have seen any indications of moves to invade from Ukraine.

While both sides have increased their cross-border exchanges of fire in recent days, there is nothing to indicate that the static lines separating them have moved or been breached.

Multiple contacts in the Russian-backed separatist areas say there is an impending sense of panic amongst people who now feel trapped by local authorities and are scared they will be caught up in the war created by a Russian invasion if it takes place.

It seems everyone we know says the same thing – my friend pretty much summed them all up.

“It’s surreal. You understand that you are in the middle of a fake republic and a war that makes no sense to regular people, who feel like cannon fodder for this war, a war that threatens you, your family, your property and your plans for the future, and it’s a tool in a big political game,” he wrote.

“It is so scary, they have given us no chance to escape this place, and the escalation of the fighting is about to start.”

“I hope this is all just about a high stakes game between Russia and the USA and it could end in the blink of an eye, and finally I can get out and have a beer with you.”

I told him I was buying.