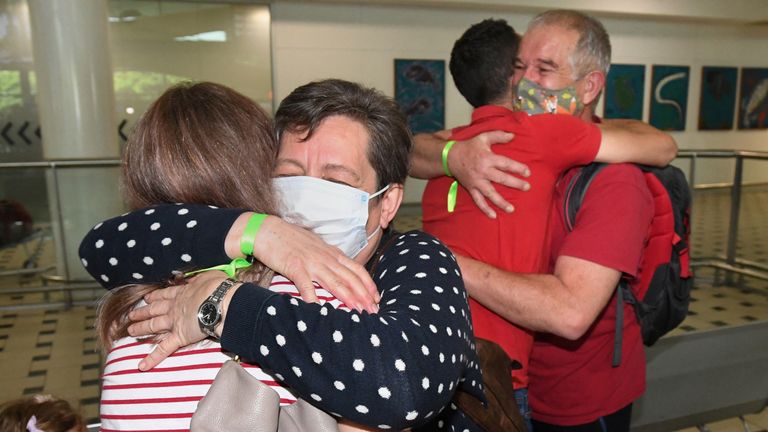 Australia has reopened its borders to vaccinated travellers after almost two years of pandemic-related closures.

Hundreds of people have been reunited with family and friends, with more than 50 international flights arriving in Australia through the day.

“It is a very exciting day, one that I have been looking forward to for a long time, from the day that I first shut that border right at the start of the pandemic,” Prime Minister Scott Morrison said during a visit to the island state of Tasmania, which relies heavily on tourism.

British tourist Sue Witton, who had not seen her son Simon for two years, was among those who have had emotional reunions.

“Seven hundred and twenty-four days apart and it means the world to me. I don’t want to let him go, it’s just beautiful. Thank you for having me back. I’m just so grateful, so, so grateful,” she told reporters at the Melbourne airport.

Tourism is a key industry in Australia, worth more than $60bn (£31.7bn) and employing almost 5% of the country’s workforce.

However, the sector has been crippled since international borders were shut in March 2020.

Tourism minister Dan Tehan said he is hopeful to see a “very strong” rebound in tourism, with Qantas looking to fly more than 14,000 people into Australia this week.

Since November, Mr Morrison’s government has slowly lifted COVID-19 restrictions, having passed the peak of Omicron.

Tourists not rushing to Australia

Despite reopening is borders, Australia may not see the boom expected immediately.

That is according to the Indy’s travel editor Simon Calder, who travelled to Australia from Tokyo on Monday.

“The welcome at Sydney airport was quite remarkable,” he told Sky News.

“But the paperwork, the bureaucracy associated with getting here was extreme, you have to be fully vaccinated, you have to have a test within 24 hours of departure for Australia and you’re not allowed to go to Western Australia, the biggest Australian state.”

He said there are concerns that Australia “has fallen off the map”.

“Scott Morrison chose to open up on what is equivalent of the 21 August in the northern hemisphere, but winter is coming as they say,” he said.

“It’s difficult to see if there is going to be much of a rush. Giant travel firm Trailfinders tell me they are getting loads of bookings, but they are for October, November, December this year.”

While Australia has re-opened its border, coronavirus restrictions will remain in New Zealand until the country is “well beyond” the Omicron peak.

Prime Minister Jacinda Arden said on Monday that cases are likely to peak in March and she will keep COVID-19 rules in place.

“If we hadn’t had vaccine passes, as we managed Delta, we would have had to instead use more general restrictions across the whole population,” she said.

“They have always been the least bad option. But while they have been necessary, as I’ve always said, they have also been temporary.

“They will remain important in some areas though, for some time.”