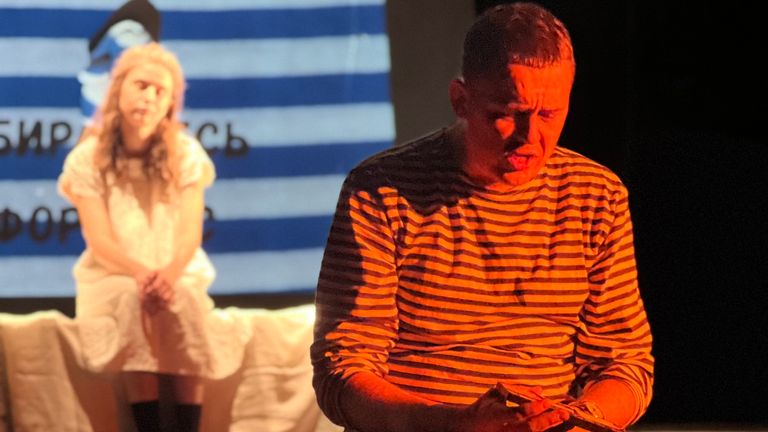 It would be easy to think that Ukraine’s second largest city, Kharkiv – as close as it is to the Russian border – would be hunkered down and fearful.

But having been here for several days it is clear to me it is no such thing.

In the grim scenarios of some military experts this former Bolshevik capital would be the first centre of population to be surrounded and forced into submission by Russian forces.

But, in truth, it remains a thriving and busy place. Thirty-three miles from the Russian border but determined to remain independent and free. And if you can judge a population’s freedom by its theatre, its art and its thinking then Kharkiv is flourishing and fearless.

‘Theatre is life, and life must go on’

In the backstreets of this city we found the “Actors’ House” Theatre and the man who runs it, Igor Arnautov. This imposing, bearded and vibrant former actor invited us in to watch rehearsals for the new play.

It is about war. Not the war that threatens now, but war in general; about soldiers, their lives and their emotions. It is moving and it is very funny, and it will pull in the crowds here.

“William Shakespeare said ‘All the world’s a stage and all the men and women merely players’. So theatre is life, and life must go on, even with everything that is happening,” he tells me.

It is eleven in the morning, and he is offering us vodka to welcome us. He laughs loudly when I say it is too early: “It is never too early.”

He takes us into the theatre itself where a rehearsal is underway. Actors in soldiers’ uniforms, directors shouting from the seats and actress Alisa Kovaleva laughing at scripted lines she is learning.

We watch the run-through of the closing scene and after the curtain comes down, we speak to Alisa and her fellow actor and the director of the production, Evgeny Safonov.

Alisa says that all the actors want to just carry on working freely: “We want to keep going as usual, because entertainment can help people overcome what is going on.”

Evgeny is very clear that he thinks the West and Western leaders have tried to cause panic in Ukraine.

“And we will carry on. And putting on a play about war is maybe the best thing. If we do that on the stage, then maybe it is less likely to happen for real.”

And they pull no punches with Putin or Russia. Evgeny’s theatre company is called Sakhalin after the name of a Siberian island that housed hundreds of Ukrainian prisoners in Stalin’s gulags.

A message ‘for all the leaders’

Theatre manager Igor admits that people are worried about Russian troops moving into Ukraine. It has been a threat since 2014 but now, with a force of 190,000 massed on the border nearby, it is more acute.

I ask him if he has a message for Putin. He thinks long and hard. “I have a message for all the leaders. For Putin and Biden and Boris Johnson. Please stop hating one another. Come together to negotiate an end to this. Please.”

He again offers us vodka. We again decline, having work to do. He smiles and shows us out.

As I leave, the words of Evgeny Safonov ring in my ears: “The show must go on.”