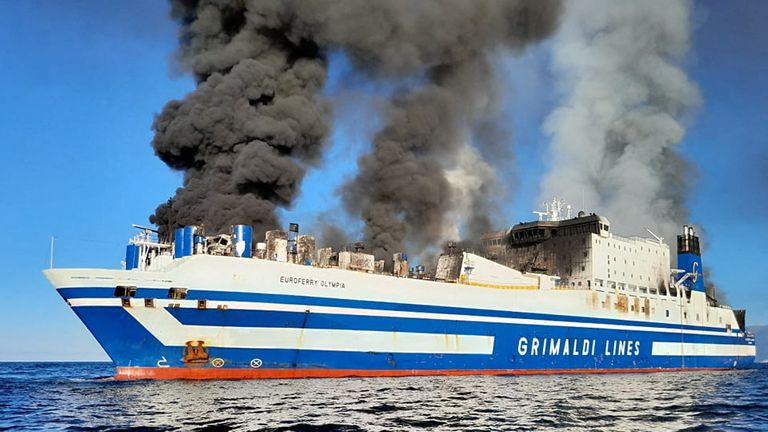 Rescue teams are still searching for 12 people after a ferry burst into flames prompting an evacuation.

The Euroferry Olympia vessel was carrying more than 290 passengers and crew when it caught fire between northwest Greece and Italy.

Passengers described people running across the ship and “tragic moments”.

After lorry driver Dimitris Karaolanidis made it to the safety of a lifeboat, he said: “I escaped hell.”

Firefighting ships surrounded the Olympia and have been working all night to tackle the blaze which broke out on Friday.

Dramatic moments as 280 people are evacuated from the ferry

It is still shrouded in thick smoke, but now, a Greek coastguard spokeswoman said only “small pockets of fire” remained on board.

It had initially been thought 11 people were missing, but the number increased to 12 after it was discovered one person on the ferry was not listed on the passenger manifest.

About 280 people were rescued and taken to Corfu. The ferry was also transporting 153 trucks and 32 cars.

A Greek prosecutor on the island of Corfu has ordered an investigation into the cause of the fire, which broke out three hours after the ferry left the port of Igoumenitsa, on the mainland in northwest Greece across from Corfu, heading for the Italian port of Brindisi.

The Italy-based company that operated the ferry said the fire started in a hold where vehicles were parked.

The ship’s captain and two engineers were arrested Friday but were released the same day, authorities said.

‘We will return to our families – that’s what matters’

“We heard the alarm, we thought it was some kind of drill. But we saw through the portholes that people were running,” Mr Karaolanidis said.

“You can’t think something at the time (other than) your family. When I hit the deck, I saw smoke and children. Fortunately, they (the crew) acted quickly.”

“The moments were tragic. It was difficult. Very difficult,” said another lorry driver, Dimitris Karavarnitis.

“Thankfully the guys responded quickly and we will return to our families. That’s what matters.”

The other missing passengers were believed to be mostly from Bulgaria. Officials said the people rescued included citizens of Albania, Turkey, Bulgaria, Romania, Greece, Italy, and Lithuania.