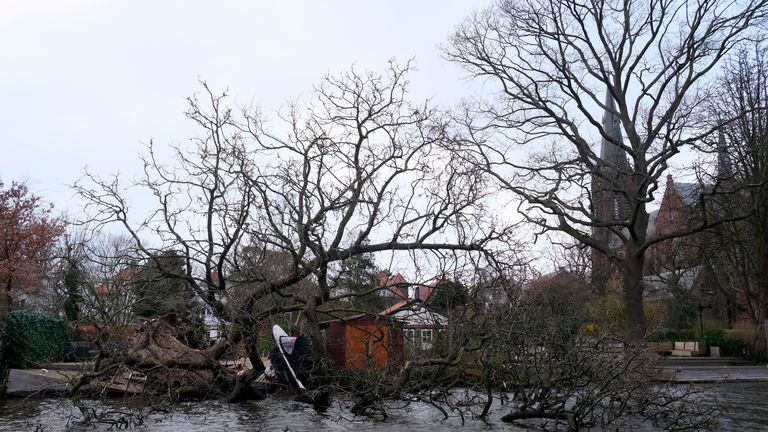 After barrelling through the UK and Ireland, Storm Eunice has gone on to wreak havoc in northern Europe.

It is the second to strike the continent in three days – and forecasters say an unusually strong jet stream over the eastern Atlantic Ocean is to blame, “acting like a production line for storms”.

While the weather system was named Eunice in the UK, it is being called Zeynep in Germany and Nora in Denmark, with several countries issuing high wind warnings as it approached. Here’s how European countries have been affected.

Three people were killed by falling trees in and around Amsterdam, firefighters said.

A fourth person died in the northern province of Groningen after driving his car into a fallen tree.

People were told to stay inside after the Dutch weather institute issued its highest warning – code red – for coastal regions, and a code orange for much of the rest of the country.

Trains were stopped on Friday afternoon and dozens of flights were cancelled at Amsterdam’s Schiphol Airport.

Wind tore part of the roof of a football stadium in The Hague, but there were no reports of injuries.

A 79-year-old British man died when a strong gust of wind pushed him off his boat into a canal in Ypres.

Strong winds sent a crane crashing into the roof of a hospital in the town of Tournai, as gusts reached up to 80mph.

One piece of the crane went through the ceiling and another fell to the ground.

There were no reports of deaths but local media reported injuries.

A teenager in the town of Menen, near the French border, was hit by a falling branch while running. He is in hospital in critical condition.

Many flights were cancelled at Zaventem airport in Brussels, where parts of the roof were damaged by the wind.

Some bus and train services were suspended and a football game between the teams of Ghent and Seraing was cancelled after the stadium was damaged.

In Co Wexford, a local government worker aged in his late 50s was killed by a falling tree as he tried to clear storm debris.

Thousands of homes and businesses were without power by Friday evening – mainly in the country’s southwest – and a status yellow snow and ice warning is in place until 10am on Saturday.

Roches Point in Cork was worst affected, with gusts as high as 85mph and sustained wind speeds of 57mph, according to RTE.

The weather system is known as Storm Zeynep in Germany.

A flood warning was issued for Germany’s North Sea coast on Friday and the country’s biggest rail operator Deutsche Bahn cancelled all services in the north.

The German meteorological service (DWD) issued a level three storm warning for the entire country and a level four warning – the highest – for the North Sea coast, where winds were expected to reach 105mph.

The DWD warned lives would be at risk from flying objects and falling trees, advising people to secure movable objects.

Light vehicles were banned from crossing the Storebælt tunnel and bridge, which link the central island of Funen to Zealand – home to Copenhagen.

The Danish meteorological office – DMI – named the storm Nora, issuing a severe weather warning until the early hours of Saturday.

High water levels and hurricane winds were possible, forecasters told The Local, but the storm would ease during the weekend.