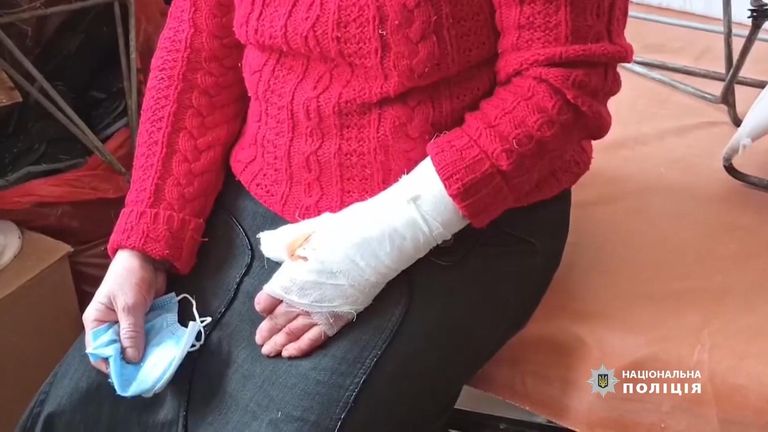 The towns here on the frontlines in eastern Ukraine sit dangerously next to the areas controlled by the Russian-backed separatists, like a broken jigsaw.

In Marinka life is divided in two. There was a time before the war in 2014 when there was calm.

Now it’s a place literally on the edge. And when the crisis escalates it’s the civilian population in the firing line and that’s what seems to be happening again.

The shells came out of nowhere. A video posted to social media claims to show the terrifying moment as they crashed on to the streets.

The woman documenting the chaos is crying and bizarrely some of the people watching do not even take cover. People are desensitised to the violence.

One woman was hit by shrapnel, and in a video released by the regional police you can see the bandages wrapping her hand which was injured.

Other areas along the dividing line also experienced barrages of artillery.

The principal of the local school, Alina Zhurakovska, fears this could be the start of another sustained round of fighting, or worse.

She shows me to the basement where she led the children when the shelling started.

“They know they are ready, they know we have a good basement and they had nothing to be afraid of, but something like this hasn’t happened for a long time.”

No one here knows where this conflict is going. For them this is another episode in a war which has changed their lives and town, they hope peace will come one day but are not expecting any miracles.