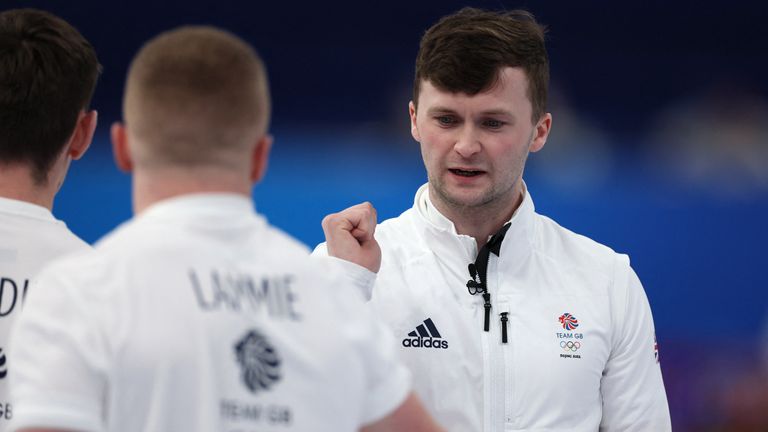 Team GB will win a medal at the Beijing Winter Olympics after the men’s curlers secured a place in the finals.

In a tight game they beat defending champions USA 8-4 in today’s semi-finals, meaning they will win at least a gold or silver medal in the final on Saturday.

The team of skipper Bruce Mouat, Grant Hardie, Bobby Lammie and Hammy McMillan will face world champions Sweden in the gold medal match, which starts at about 6.05am.

The USA will play Canada on Friday morning in the battle for bronze.

Team GB has yet to win any medals after 13 days of the Games.

Fighting back from a nightmare start in which they conceded two with the ‘hammer’ in the first end, Team GB led by a point at the halfway stage.

The Americans blanked three consecutive ends as they sought a bigger return for their last stone advantage, but were forced to give one away in the ninth.

Armed with a 6-4 lead going into the final end, Mouat’s team retained control, and when US skip John Shuster’s final attempted take-out went awry, the Britons’ advance was secured.

Mouat said was pleased with the win after a mixed bag of an Olympics so far.

“The last two weeks, especially for myself, has been a bit of a roller coaster so this is very special,” he told BBC Sport.

“I’m so excited to be able to share the moment with the guys and the celebration at the end was pure elation. I don’t think I can sum it up any other way.

“I am excited to play that game and we have got a day off tomorrow. Just looking forward to getting on the ice again and going for that gold.”

GB’s women’s curling team will be hoping for similar success when they take on Sweden in their semi-final on Friday.

They qualified from the round-robin stage with a final match victory of the Russian Olympic Committee.