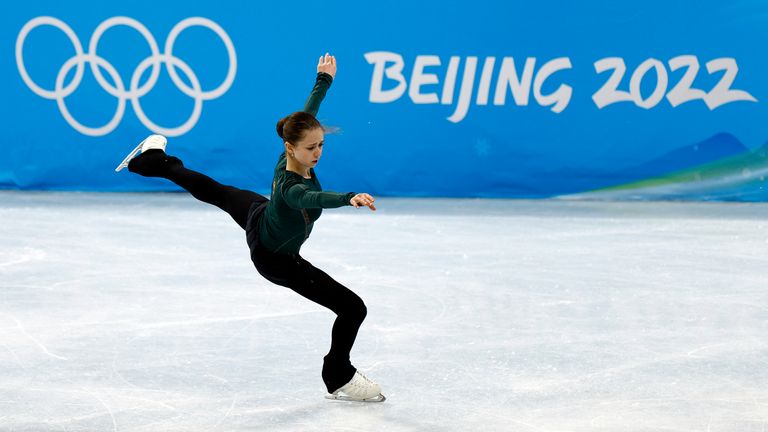 Russian figure skater Kamila Valieva has failed to win a medal at the Winter Olympics after falling several times in her final routine.

The 15-year-old, who controversially failed a drugs test before the Games began, was in tears on the ice at the end of her performance in the individual event.

Valieva was cleared to compete on Monday – a decision that was contested by the International Olympic Committee but overruled by the Court of Arbitration for Sport.

A sample from her was taken on Christmas Day – and on 8 February, it returned positive for trimetazidine, a heart medication.

Valieva’s legal team claimed that her positive drugs test may have come from a contaminated glass of water that contained traces of her grandfather’s heart medication.

Read more: Five key questions as she goes for gold at the Winter Olympics

Explainer: What is trimetazidine – the drug at the centre of the Beijing Olympics doping scandal?

A separate investigation led by the Russian Anti-Doping Agency will determine whether Valieva and her Russian teammates can keep the gold medals they won in the team skating event last week.

What happened on her final run?

The teenage figure skater left the ice in tears after falling twice and a series of further errors in her free skate, which saw her miss out on medal contention in Beijing.

Valieva started with a two-point lead over her compatriot Anna Shcherbakova after a strong run on Tuesday.

She then skated to ‘Bolero by Maurice Ravel’ in her free skate but a score of 141.93 saw her drop to fourth place in the final standings.

The 15-year-old was visibly upset while waiting for her final scores in tears.

Valieva’s fall out of the top three meant the flower ceremony – and subsequently the awarding of medals – will take place after all.

If she had finished in a medal position, Valieva would have had an asterisk applied to her name in the Olympic record books

Valieva faced the prospect of being thrown out of the Games and having her results – including her gold in the team event last week – expunged from the records if her test for the banned heart medication trimetazidine is upheld.

The International Olympic Committee has already confirmed that no medals will be awarded pending the outcome if Valieva finishes in the top three, and its spokesman Mark Adams confirmed earlier this week: “There will be an asterisk about the results on Friday because they will be preliminary.

“This case has not yet concluded and the CAS (Court of Arbitration for Sport) have made that very clear. In fact, as far as I know, the B sample hasn’t even been opened, so I think drawing conclusions like this at this stage is really inappropriate.”

Former Olympic figure skaters had sympathy for the teenager after missing out on a medal.

Ashley Wagner, who won silver at the same event in the 2016 Games, said she is “sick to my stomach”.

Writing on Twitter, she said: “This is a moment where you genuinely have to say- that poor kid.

I can’t watch this. They all look devastated. This just shows that these a children that are put in a position that is so wildly unhealthy and harmful to them. I’m sick to my stomach. #WinterOlympics #FigureSkating

Polina Edmunds, who represented the US in the 2014 Olympic Games, said it was a very “traumatising” experience for teenager.

“Very traumatizing Olympic experience for Kamila Valieva. She should not have been allowed to compete, it’s devastating that she was put in this situation, on all levels,” she wrote.

Very traumatizing Olympic experience for Kamila Valieva. She should not have been allowed to compete, it’s devastating that she was put in this situation, on all levels.

There could still be a medal for Valieva

Despite missing out on the podium, Valieva might still get a team medal.

Hours before the finale in the free skate event, the president of the Russian Olympic Committee promised to fight any effort to take away the gold medal in the team event, even if Valieva was eventually disqualified for doping.

Stanislav Pozdnyakov insisted that the anti-doping rules were written in such a way that a review of results in a team event would only take place if the alleged anti-doping violation had been committed during the Olympic Games.

“We will defend this position consistently in any possible proceedings, including in the court of arbitration for sport if required,” he said.