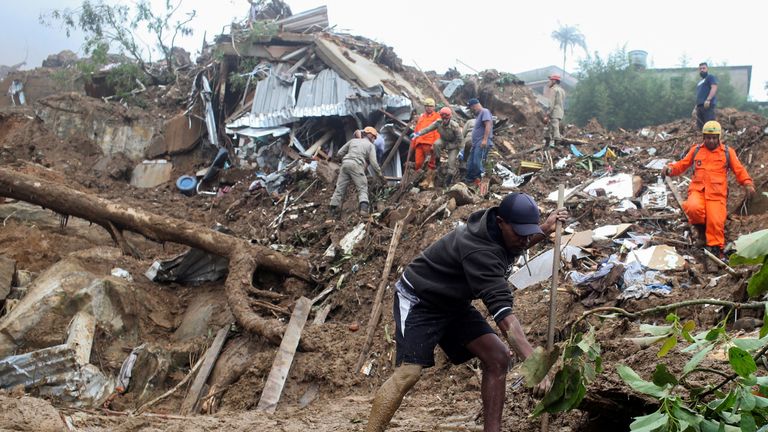 At least 94 people have died and dozens are still missing after devastating mudslides swept across the Brazilian city of Petropolis.

Rubens Bomtempo, mayor of the city, failed to give an estimate of how many people are thought to be missing as survivors continue to dig for their loved ones more than 24 hours since the deadly deluge.

“We don’t yet know the full scale of this,” he said on Wednesday. “It was a hard day, a difficult day”.

So far, Rio De Janeiro’s public prosecutors’ office has compiled a list of 35 missing people, although this could be higher.

Social media footage of the disaster showed homes and cars being dragged through the streets by torrents of swirling water.

In another video, two buses can be seen sinking into a river, with passengers clambering to safety out of the windows.

Some did not make it and were swept away by the flood.

“I could only hear my brother yelling ‘Help! Help! My God!’,” said Rosilene Virginia, who was caught up in the deluge.

“It’s very sad to see people asking for help and having no way of helping, no way of doing anything. It’s desperate, a feeling of loss, so great.”

Rio de Janeiro’s governor Claudio Castro said this is the worst rain Petropolis has received since 1932 and 400 people have been left homeless as a result.

On Tuesday, there was 10ins (25cms) of rainfall in three hours, which is nearly as much as the total rainfall for the past 30 days, according to the state fire department.

As forecasters expect more rain for the rest of the week, equipment and manpower have been ramped up to help rescue efforts.

The mountain region of Petropolis has experienced similar disasters in recent years, including one that caused more than 900 deaths.

A plan was introduced in 2017 to reduce the risks of landslides, but progress has been slow.

According to the plan, 18% of the city’s territory was at high risk.

Petropolis has a rich tourist industry and its affluence has drawn residents from Rio’s poorer regions.