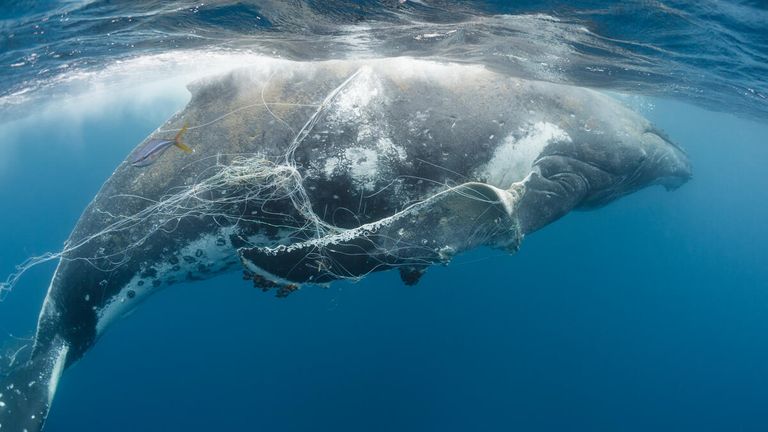 The world’s first ever global map of whale migration patterns has been published, shining a light on the “growing threats” to these endangered creatures of the deep, its authors say.

Scientists have combined satellite tracking data from 845 whales, collected over 30 years, and mapped it alongside the various and growing dangers whales face, which they say show the bottleneck areas that need to be addressed most urgently.

“One map speaks a thousand words and you can see there on paper where things should be done and what should be done,” said Dr Simon Walmsley, chief marine adviser at WWF UK, which compiled the study.

Whales are known as the “sentinel species” of the sea, reflecting ocean health and warning of risks to human health. But six of the 13 “great whale” species are endangered or vulnerable.

The dangers are many: entanglement in fishing gear kills 300,000 cetaceans a year, plastic pollution can starve whales that confuse it for food, and collisions with ships can be deadly.

“We knew that the threat level was going up, but we wanted to visualise the expanse of whale migrations in these superhighways, and the connectivity between the critical places that have to get to,” Dr Walmsley told Sky News.

Protecting whales is important “to the functioning of the ocean, but also to the survival of humans,” explained Dr Xiaoyan Wei, an oceanographer at the National Oceanography Centre who did not work on the study.

They are “helping us fight against climate change,” said Dr Wei, because whales themselves are huge storage units of climate-heating gas carbon dioxide. They accumulate more carbon over their lifetime than a thousand trees.

They also fertilise different depths of the oceans through their excrement, boosting the production of phytoplankton: a tiny life form that forms the basis of the marine food web and can capture 40% of the world’s carbon dioxide.

That means it’s no use “protecting whales in one place where they congregate,” he said. “You have to protect them the full length of that migration route because they’re experiencing threats all along.”

WWF UK wants the upcoming UN high seas treaty, due for further negotiations again in March, to include a network of Marine Protected Areas, which are universally recognised and not only by those who establish them.

While it would be almost impossible to implement MPAs across entire whale superhighways, other measures – such as ships slowing down, avoidance software, or quick release fishing gear – could fill in the gaps in the most important areas, the conservation group says.

The world has only around 350 North Atlantic Right whales left. “The threat of extinction shows the need for this action is now,” said Dr Walmsley.