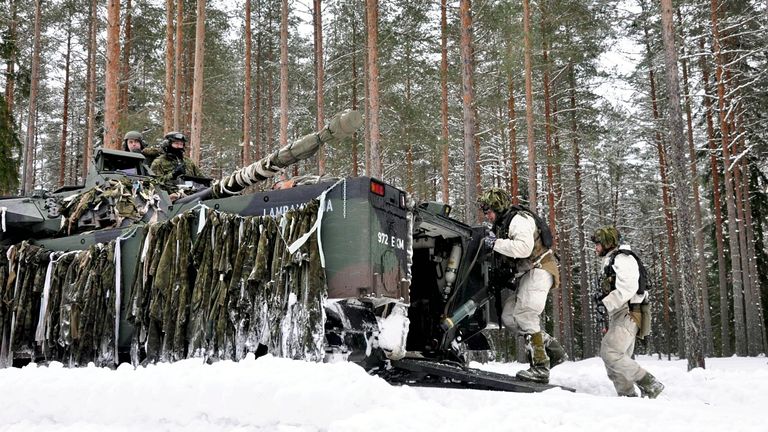 The warm relationship between Ukraine and the western military alliance NATO plays a key role in the tensions between Kyiv and Moscow.

The NATO alliance is made up of 30 countries, including France, the UK, Turkey and the US, the biggest defence spender in the world.

If Ukraine were to join NATO, it would increase the amount of border shared by Russia and the US-led military alliance.

How many bases does NATO have to support Ukraine?

Speaking to Sky News, a NATO official said: “Generally speaking, NATO has very few permanent forces of its own.

“When the North Atlantic Council agrees to launch an operation, members contribute military forces on a voluntary basis. These forces then return to their countries once the mission is completed.”

But what does that mean?

The NATO alliance has a 40,000-strong force of soldiers, sailors and airmen permanently ready to mobilise.

Its combat troops are hosted in bases supplied by the NATO country they are deployed to. They could be considered “host bases”, rather than a base run solely by NATO.

NATO forces are already operating in key locations in eastern Europe, with 1,000-strong battle groups in Poland, Latvia, Lithuania, and Estonia – which is headed up by the UK.

NATO’s air assets are also deployed to host bases. The NATO official said the Amari airbase in Estonia, Siauliai airbase in Lithuania and Mihail Kogalniceanu Air Base in Romania are all sites that air assets can be deployed to.

If tensions escalated and saw NATO getting directly involved, the alliance could draw on the individual militaries of each country – that would be a total strength of some 3.5 million military personnel.

How quickly can NATO move?

NATO’s military power includes forces which operate at the very highest level of readiness to fight, with capabilities across land, sea and air.

The NATO Response Force (NRF) is made up of 20,000 servicemen and women.

Part of that structure includes the Very High Readiness Joint Task Force, which was created by allies to bolster defences after Russia annexed Crimea in 2014.

The NATO official said both NATO’s Very High Joint Readiness Task Force and NATO’s Response Force can be deployed from positions in Poland and Romania.

In addition to these bases, NATO also has offices they say are designed to help facilitate the rapid deployment of forces to the eastern part of the Alliance. These offices are called NATO Force Integration Units and are involved in planning, training and exercises.