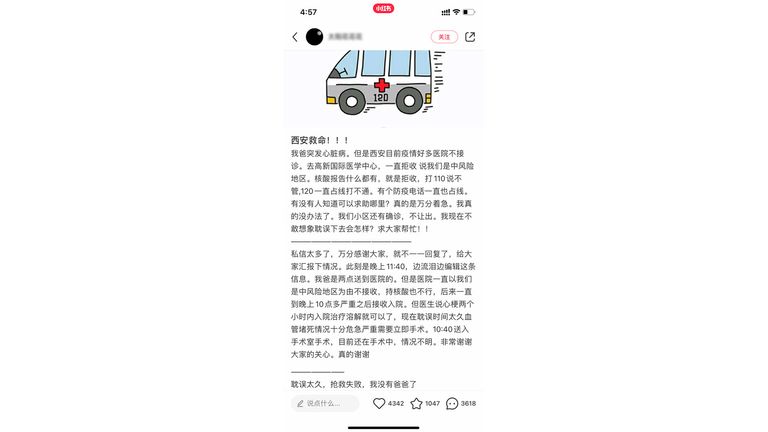 In one post, a woman put a call for help out online after her father suffered a heart attack but was refused care as he came from a medium-risk location, despite having a negative PCR result.

The post was later updated, detailing that her father did finally receive treatment, but that it came too late and that he sadly died.

It is an example of the wide array of hardships experienced by the people of Xi’an, a city almost the size of London at the centre of China’s latest COVID outbreak.

It has been locked down for the past two weeks after reporting more than 1,600 cases.

The incidents in Xi’an have been widely shared on social media sites such as Weibo.

It was on this site that a woman posted her pregnant aunt had been refused entry to a hospital on New Year’s Day despite experiencing stomach pain, as she didn’t have the necessary negative PCR result.

Staff finally admitted the woman two hours later when they saw that she was bleeding, the post said. The woman unfortunately lost the baby.

Further hardships have been documented online.

Several posts have shown how communities are bartering for food due to shortages. The image below shows someone swapping vegetables for sanitary towels.

Party officials have been harsh with anyone not adhering to the lockdown.

One man was made to read a letter of apology after pandemic workers stopped him escaping over a wall as he left his community to go food shopping.

There have been reports of officials beating citizens who were out on the street without good reason. Some have also complained that inadequate quarantine facilities are being provided.

China has been remarkably successful in managing COVID. But what’s happening in Xi’an shows why China’s approach would be impossible in the West.

It’s not just a question of democratic attitudes – many Western countries’ citizens have shown their resolve in putting up with harsh lockdowns.

But it’s possible in China in a unique way. Most people live in large compounds, which are easily sealed off. There is a huge surveillance system in place to manage them. An army of police and baoan – semi-official security guards – are already at hand to enforce restrictions. And the overriding incentive for officials is to preserve the “dynamic zero COVID policy” – people’s welfare comes second.

And then, if there are public complaints, it’s relatively easy for authorities to scrub them from the internet, in a way that would be impossible in a free country.

Which makes what we’re seeing from Xi’an even more remarkable. Despite the censorship, and the social pressure to follow the party line, people’s desperation is enough to break through.

Many commentators abroad have wondered whether China’s zero COVID policy is sustainable. Most Chinese people, living a safe and COVID free life, had found that idea ridiculous. But because of Xi’an, some here are now asking the same question.

One conversation on WeChat suggests some in Xi’an have been sent to neighbouring city Weinan to quarantine, where 18 people reportedly share a room and are supplied with only a quilt and a bucket of instant noodles per day.

Yet, communities have been pulling together.

The tweet below refers to a video of someone receiving food from the local community, where a woman explains she has received meat, eggs, and vegetables in supplies.

A local Xi’an resident said in the video, her community delivered free groceries to her family, including raw chicken legs, eggs, noodles and other vegetables during lockdown. pic.twitter.com/JFVZtxMUX4

Food exchanges have also been established and people have volunteered to help others in the pandemic.

And there is hope the situation will improve – in recent days the number of COVID cases has fallen in Xi’an, suggesting the lockdown is working.