Earlier, Mr Trump had tweeted that Kim Jong Un would not want to risk the relationship between the countries and affect the American presidential election by resuming hostile acts.

The president tweeted: “Kim Jong Un is too smart and has far too much to lose, everything actually, if he acts in a hostile way. He signed a strong Denuclearization Agreement with me in Singapore.”

Mr Trump was referring to a statement issued after the two leaders held their first summit in Singapore in June 2018, which called for a nuclear-free Korean Peninsula – but without describing when or how it would occur. 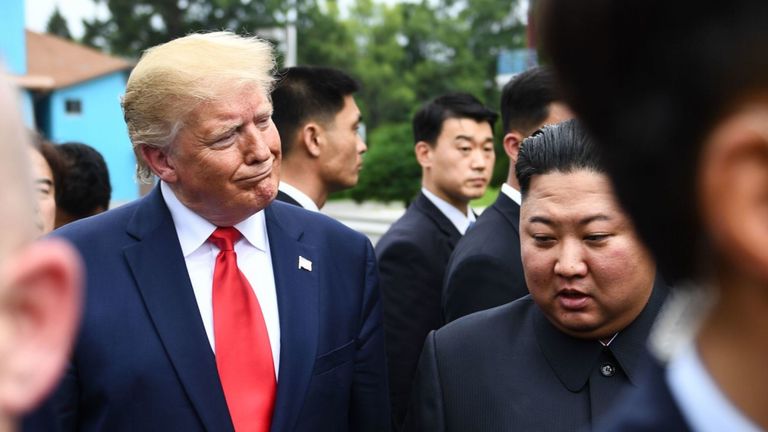 In a statement on state media, senior North Korea official Kim Yong Chol said that his country would not cave in to US pressure because it has nothing to lose, and accused the president of trying to buy time before the end-of-the-year deadline to restart nuclear talks between the two countries.

Mr Kim said that Mr Trump’s tweet was clear proof that he is an “irritated old man bereft of patience”.

“As (Trump) is such a heedless and erratic old man, the time when we cannot but call him a ‘dotard’ again may come.”

North Korea famously called M Trump a “dotard”, meaning an old, weak and confused man, as the two countries engaged in a war of words in 2017.

Kim Yong Chol’s added: “Trump has too many things that he does not know about (North Korea). We have nothing more to lose. Though the US may take away anything more from us, it can never remove the strong sense of self-respect, might and resentment against the US from us.”

The official met the US president twice last year at the White House, and helped set up the two nuclear summits with Kim Jong Un.

Nuclear talks stalled in February, after the pair’s meeting in Singapore broke down after the US rejected North Korea’s request for a large relief on its sanctions, in exchange for a partial surrender of its nuclear programme.

:: Listen to the Behind the Headline podcast on Apple Podcasts, Google Podcasts, Spotify, Spreaker

They briefly met again in June at the South and North Korean border and agreed to resume talks, but a meeting in October broke down after North Korea accused the US of having an “old stance and attitude”.

Kim Jon Un has said that his country will find a “new way” if US-led sanctions are maintained on North Korea, and told Mr Trump he had until the end of the year to accept mutually agreeable terms for a deal.

5G: The key to unlocking the future of digital platforms →

Huawei delivered a lifeline from Samsung as latest US sanctions hit →